Bollywood Superstar Amitabh Bachchan was born on 11 October 1942. He has gained so much fame and name in the Indian Cinema that audiences have given him several names like Angry Man, Big B, Millennium Superstar, Bollywood King and Ruler etc. The old man is going to enter in his seventies but still he looks young to today’s crowd.

Not only just old people but even the today’s youngsters are his greatest fans. He is one of the but rather I would say the only star in the history of Indian Theatre that has grabbed success at this very level.

Amitabh’s father name was Mr. Harivansh Rai Bachchan, who was a Hindi poet. The obedient son even today remembers some of his father’s greatest hit poems and sing them at various instances.

Mr. Bachchan’s first Hindi movie was ‘7 Hindustani’. Big B’s initial movies were all flop and people didn’t like him in the beginning. At that time, all the actors were of small heights and only Amitabh was tall. He also got some negative comments from the people (both, from audiences and film-industry ones) regarding his height. People even commented that reduce your height if you want to succeed. Some made huge fun of this actor. But the man, instead of losing his heart, stayed firm on his thinking and thought that one day he will also get success. He did films in very less prices but they also all failed. At last, he gave up and decided to go back to his city Allahabad back. 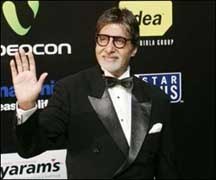 But, luck turned on him and he got ‘Zanzeer’. The film was a huge success and all also admired him for his notable performance. He got some confidence and after Zanzeer, he got some other hits too. And he started making a grip over the Mumbai Film Industry.

Then he gave numerous hits and even super-hits like Coolie, Deewar and Don etc. Movie Sholay made him superstar as it became the huge love of people. One of the Mumbai theatres earned just from Sholay for continuous 5 years.

People started calling him as the ‘Angry Young Man’.

During 1970-80, only one Bollywood actor dominated the industry and that was Mr. Amitabh Bachchan. Films crossed the expected profit line just because of Big B in them. The actresses started insisting directors and producers to work with him.

Later, Amitabh married Jaya Bhaduri, the actress of that time. From Jaya, he got his son to whom he named Abhishek. Abhishek is also a successful actor of B-town and is married to the beautiful actress Aishwarya Rai.

Aishwarya is pregnant now-a-days and whole family is expecting a sub-junior B :).

Amitabh’s birthday comes on October 11 and we all wish him Happy Birthday to take birth in India.

On his birthday, he often misses his parents and says that he still loves them a lot.

Even at this very age, he is the boss and is still ruling the market.