Telugu Actor NTR Junior married Lakshmi Pranathi on 5 May 2011, Thursday at Hitex, Hyderabad. Lakshmi is a daughter of famous businessman Mr. Narne Srinivas Rao, who also runs a well reputed studio by the name Studio N. She is also niece of N Chandrababu Naidu, who is the former Chief Minister of Andhra Pradesh.

Indian Rupees of 18 crores were invested in the Kalyana Mandapam and Art Director Anand was monitoring it. Around 300 workers were set to complete the mandapam. The Invitation Card cost Rs. 3,000 for one copy. It is said that the whole Marriage cost was estimated something about 100 crores. Music was arranged by the famous singers. A special song dedicated for the marriage was composed by Arjun and Geetha Madhuri & Chaitanya Krishna sung this song.

The wedding is known as Biggest Marriage of Arunachal Pradesh. Almost all relatives, celebrities, politicians were invited in the marriage ceremony. CM Kiran Kumar Reddy, Chiranjeevi with son Ram Charan, TD Chief Chandra Babu etc. were at the venue. The guest-count reached to a total of 10,000.

Many hotels were booked and special accommodations were provided to the guests. Huge Parking Space was reserved for them to park their precious cars.

The wedding ceremony was shown live on many news channels. Almost all Tollywood famous personalities were present at the occasion.

Jr NTR even invited some of his biggest fans that he knew.

Whole food-arrangement was done by one of the best food services company of Vijaywada.

The lighting system was amazing. The sky was filled with voice of crackers all around. It was looking as some prince’s function is taking place.

A huge traffic jam was there in Hitex and madhapur and the surrounding nearby areas. The security-guards only allowed the VIPs with special cards to enter the hall. The fans and other public were just waiting outside and were not allowed to enter in the function. 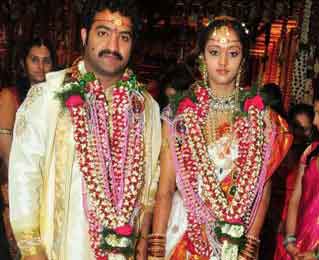 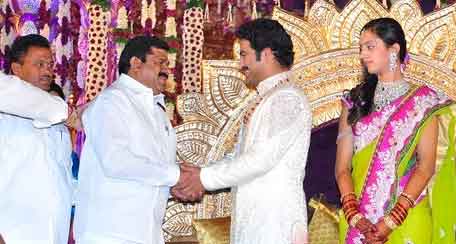