Do you want to become rich in this world – either can be a millionaire or billionaire or even more than that. I know the answer would be yes as everyone of us want to top this list and just want more and more money and wealth.

So, here I am showing you the list of top-most Richest persons on this earth and when you will come to know about the dollars and the property they are holding, you will be surprised and I think will dream to have atleast have some share of that. I don’t know whether you will dream or not but I have started dreaming :).

Please note that the list is in descending order, with the richest person on number 1 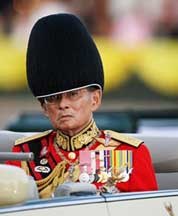 You might be thinking that on top of the list, there might be some United Kingdom or United States of America personality. But it is not the case. The top most position is acquired by King of Thailand. And he is very old, about 83 in age. Total property that he is acquiring is $30 billion. He was born in US and did his education in Switzerland. He has his shares in many companies like Siam Commercial Bank and Siam Cement. He also owns more than 3500 acres land in Bangkok, which is being cared by Crown Property Bureau. But the govt of Thai claims this land to be not the personal wealth of King Bhumibol Adulyadej.

His fortune is of $20 billion. Sultan Haji is 64 in age. He is Brunei’s 29th Sultan. He has a son aged 28, Prince Azim who was doing the Royal Military Academy Course in United Kingdom and which he left in between. He has no losses and no gain total wealth and money and total stands on the same.

Prince Hans Adma is 66 years of age and is the head of 900-years old family. He owns a private bank LGT and that bank was caught in hiding the taxes. Also his son, Prince Max was questioned by the government of Germany for non-payment of the taxes. He has a big land in Austria, something around of 50k acres and many palaces of 17th century era.

King Mohammed is of age 47 has mines of gold and phosphate. Morocco itself is the biggest exporter of phosphate in the world. At Tangermed, a port is being constructed and which is expected to be completed by 2012. It will be one of the largest ports of Africa, when completed. He married Lalla Salma, the princess, in 2002.

Sheikh Hamad of 59 years deals in Oil and Natural gas. His company deals with Belgium, Taiwan and Korea. His father was removed from the Throne in 1995 and after that, he came into power.

53 years of age Albert II Prince is head of Monaco. This small town is even smaller than the Central Park of New York. He is an environmentalist. He had romance with an Olympic swimmer of South Africa, Charlene Wittstock. He didn’t marry but has 2 children- one daughter who is in California in America and a son who is a Togolese flight attendant.

74 years old Karim Al Husseini is the spiritual leader and prince of Ismaili Muslim community of the Aga Khan Development. This community’s main business is to promote the investments in Africa and Asia. Karim has also been awarded as ‘Grand Donor’ and ‘Grand Patron’ by France Minister as Karim is great fond of and contributes his time in promotion of cultural world. Canadian govt has also awarded him as Canadian citizenship.

The sultan is having money of $700 millions. His money dropped by $400 millions as the oil revenues fall abruptly. Also, in the capital city Muscat of Oman, more than 750 homes are under construction. Also, the expanding work of ship yard complex is also utilizing the money. The 70 years old Sultan has great passion for classical music of their country. The surprising thing is that he is not married yet and has not even adopted any children. And who will be the successor of his land is still unknown and a question in everybody’s mind.

The old lady of 85 years age is having total property of 450 millions dollars. She is down by 200 millions bucks. In England history, she is the oldest monarch living. Once USA president Barack Obama and his wife hugged the queen which caused good flow of news everywhere. She suffered losses as the properties in England fall down and also the rates of stamps and art came down. It is to be noted here that the Crown Jewels, Buckingham Palace are not counted in her assets as those are considered the government and public property.

The man Sabah is 82 years old. Sheikh Nasser, the prime minister was held responsible for doing the corruption in the country of Kuwait. One of the banks of Kuwait, Gulf Bank was suffering the financial and political crisis and the cabinet of Emir resigned in the month of March. The resignation was followed by the allegations of 5 Muslim Parliament members. But Shiekh denied from all the charges and said that he is innocent. Sheikh Sabah then cancelled the whole parliament and then he reappointed Nasser as PM.

The old lady is having assets equal to 200 million dollars. She is also down by $100 millions, as the king in number12 point below is down. Previously her property was 300 bucks but she got down as she suffered huge losses in the real estate world. Much loss was experienced when the scheme of Bernard Madoff Ponzi failed. The queen including with her family members suffered a great injury when one man hit his car into the queen’s bus. Some of the peoples were killed in that accident. Rumors spread that it was not an accident but infact a planned game so that her elder son Alexander William can be the king. The lady is 73 years old.

Mswati3 king from Swaziland has total assets of 100 million dollars. He is down by the same value i.e., 100 million dollars. The country Swaziland is sometimes also called as Swatini or Ngwane and is in South Africa. Mswati III is just 43 years old. He is the last crowned head and is trying his best to maintain good relations with Jacob Zuma, president of South Africa. The opposition head has spent his times in the prison and now when he visits USA, he likes to stay in Hotel Mandarin Oriental in New York, America.