This was really a wonderful start of IPL season 4. Dhoni’s Chennai Super Kings defeated Gambhir‘s Kolkata Knight Riders just by 2 runs in the match played at MA Chidambaram Stadium, Chennai, India. The match was between CSK and KKR.

After winning the toss, Chennai Super Kings elected to bat first. Aniruda Srikkanth, the opening batsman of CSK, played a wonderful inning. He gave a good start and made 64 runs in just 55 deliveries with the help of 6 fours and 2 huge sixes. His performance was like what the captain really except from any opener. Jacques Kallis took his wicket in the last over of the match.

The other opener Murali Vijay was not able to stand for a long time on the crease and got bold by Iqbal Abdulla. Vijay made 4 runs in 4 balls. Raina and MS Dhoni also played well. Suresh Raina made 33 runs in 29 balls (with 4 fours) whereas the CSK captain Dhoni made 29 in 21 balls. His innings included 1 four and 1 six. Albie Morkel and Scott Styris remain unbeaten on 15 and 5 respectively. CSK gave the target of 154 to KKR to win the game. 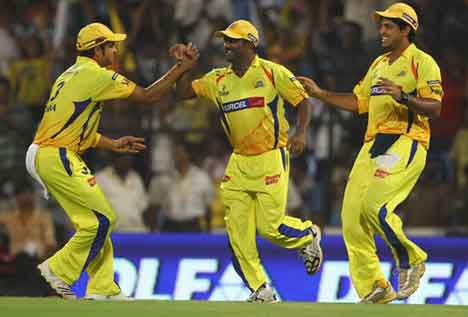 The KKR openers Manvinder Bisla and all rounder Jacques Kallis both gave a solid start to the team. They made a partnership of 64 runs for the first wicket. Bisla made 27 runs whereas Kallis collected 54 runs in 42 balls (with 7 fours). Shabad Jakati broke this partnership by taking the wicket of Bisla, who was stumped by MS Dhoni.

In the last over, KKR team was in the need of only 9 runs to won the game but the team was able to make only 6 runs in the over and lost the match by 2 runs. Really, Dhoni know very well to whom the last over should be given.

This match was very interesting but without Dada (Sourabh Ganguly), it was really looking as tasteless. We are really missing you Dada. Hope to see you in IPL season 5.