In Dubai, ICC Awards Ceremony of this year is being awarded to Indian Captain Mahendra Singh Dhoni. During the period, Dhoni played 24 ODIs and scored 967 runs at an average of 60.43 and at a rate of 86.63 runs per 100 balls faced. In total, he made nine fifties. Also in the period, Dhoni claimed 26 dismissals (18 catches and 8 stumping) as a wicket-keeper. He is also currently ranked No. 1 in the ICC Player Rankings for ODI batsmen. In the last 2 years, his success graph has given him very much to cheer about. Dhoni faced tough competition from teammates Yuvraj Singh and Virender Sehwag as well as West Indies’ Shivnarine Chander Paul to take the prestigious award.

Opening batsman Gautam Gambhir won the best Test Player of Year award and also featured in the World Test Team of the Year. In total matches, Mr. Gautam made 1269 runs at 84.6 average. He made this target in 8 matches. In this score, there were 4 50’s and 5 100’s. Gambhir won this award beating Australian bowler Mitchell Johnson, England skipper Andrew Strauss and Sri Lankan Thilan Samaraweera. And to claim the first ICC award of his career, Gambhir also made to the ICC Test Team of the Year. 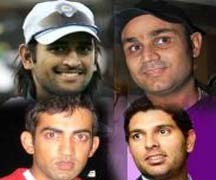 The 27-year-old Gambhir received the award from legendary Indian batsman Sunil Gavaskar and said that it is his dream that is now a truth.

Besides Dhoni and Gambhi, Sachin Tendulkar also featured in the world Test Team of the Year. Spinner Harbhajan Singh was named twelfth man of the squad.

Along with captain Dhoni, Virender Sehwag is also in the ODI Team of world.

During the voting period of August 13, 2008 to August 24, 2009, the 27-year-old fast bowler Johnson took 80 wickets from 17 Test matches he played in the year. Johnson’s best match bowling figures were 11-159 against South Africa in Perth in December of last year and his economy-rate over the whole period was mere 3.12. He has also managed to score a total of 632 runs for Australia, including a century and three half-centuries, to register an average of 30.09.

Johnson played 16 cricket matches, all One Day International and took 28 wickets with 24.25 average rate. Johnson’s best was against South Africa of 4-34 in April.