The boss of toss Mahender Singh Dhoni won the toss and elected to bat first. The Indian openers Virender Sehwag and Sachin Tendulkar both gave a solid start to Indian batting. Especially Sehwag in his aggressive style made 38 runs in just 25 balls by hitting nine boundaries in his short inning. He was taken by Wahab Riaz.

The one down comer Gautam Gambhir (27 runs on 32 balls with 2 fours) and Tendulkar played very well and added 68 runs for the partnership of 2nd wicket. Gambhir was then stumped by Kamran Akmal on the ball of Mohammad Hafeez. However, both Kohli and Yuvraj proved unlucky. Just on the first ball of his inning, Wahab Riaz took Yuvi’s wicket. 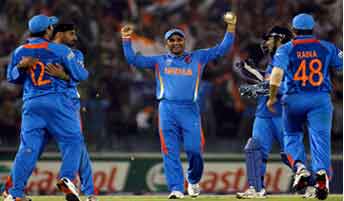 Man of the Match, Tendulkar, played a brilliant inning in the match. However, in the first time of his career, luck was with him and he got 5 lives in the inning. His 3 catches were dropped by Pakistani players. Sachin lost his wicket when he directly hit the ball and the ball went in the hands of Pakistani Captain Afridi who took a brilliant catch. Saeed Ajmal took the precious wicket of Sachin when he was on 85 runs (115 balls, 11 fours).