Due to degenerative knee condition, Lasith malinga, Srilankan fast bowler, has officially announced his retirement from the long format of cricket on Friday 22 April, 2011. In order to continue his international cricket in ODI and twenty 20, he decided to get retire from test cricket.

According to Malinga, his orthopedic consultant and national team physiotherapist has advised him that his knee condition will degenerative if he continue his bowling for prolonged period. He has a long-standing degenerative condition in his right knee which does not allow him to play for a long time continuously.

After quitting from test, he will be available for one day and twenty-twenty international. He wants to focus on short type of cricket i.e., ODI. Currently, he is a playing member of the Mumbai Indian team in IPL and is playing well under the captaincy of Sachin Tendulakar (the MI captain).

In his words, on the request of SriLankan Team Management and Selectors, he tried to return back in test after a long time gap of three years but still his knee pain is not allowing him to play in long format. And still if he continues to play in test, this could lead to a permanent injury and it may also end his cricket career, even from one day and short versions of cricket, which he does not want. His dream is to represent Sri Lankan team in upcoming T20 WC and 2015 world cup. For this, he thinks that it is the right decision to not play in 5 day cricket format. 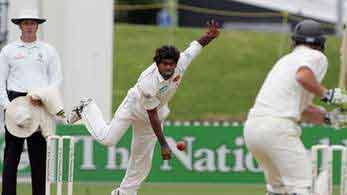 His debut year for Test was July 01, 2004 against Australia at Marrara Oval, Darwin. He is the only second pace bowler of SriLanka who has claimed more than 100 wickets in Test. He has played only 30 matches and has taken 101 wickets with the economy rate of 3.85 with the average of 33.15. His best bowling in the innings was 5/50. He has also taken 7 times four wickets and 3 times five wickets in the inning.