Sachin, king of records, is also known as by God of Cricket because a new record always waits for him whenever he steps on the ground. Recently, he has added a new turn in his career graph by hitting a century against England.

He played a superb inning in the match at M Chinnaswamy Stadium of Bangalore. He scored 120 runs in 115 balls, which include 10 fours and 5 big sixes. However, the result of the match was tie but still the match would be remembered because of the history created by Master Blaster Sachin Tendulkar.

Sachin completed his century in just 103 balls. When he was on 98 runs, he hit a boundary to get four runs in order to complete his 100. After completing the century, he hit 2 more sixes which helped him to take the score to 120. This brilliant innings came to an end when Michael Yardy took a fine catch by running over from the mid-off on James Anderson’s ball. It was the 39th over of India’s inning.

You will also like to read these articles to know more on Sachin Tendulkar: 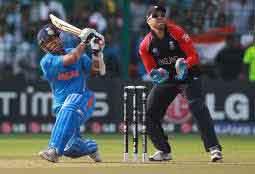 It was Tendulkar’s 47th ODI century, 2nd versus England, 98th overall international ton and 5th World Cup 100 for him. Now he is the only man to score 5 centuries in World Cup. Ricky Ponting is the only playing player with 4 centuries following Tendulkar.

If you have missed the chance to watch that history, here we are providing the video of his 47th ODI hundred. Watch and enjoy 🙂