Here on Tuesday, at one side the grandmaster Viswanathan Anand made India feel proud by becoming World Chess Champion and on the other side in Beausejour Stadium, Indian cricket team made all Indians shameful by losing 3 consecutive matches of Super-8 Series of T20 world cup. After losing the last match from West Indies by 14 Runs, Indians lost this match by 5 wickests from Srilankans.

Don’t know what has happened to our Indian cricket team. Like last Twenty 20 world cup, Indians were not able to qualify even for the semifinals.

Who could say that this is the team who was once champion in year 2007. Instead of doing practice, they were enjoying on the beach from the very first day of the match. Then how could they get the T20 troply for India?

Though in the very first over of the match, Ashish Nehra took the dangerous wicket of Mahela Jayawardene (4 runs in 3 balls) and Vinay Kumar took wicket of Sanath Jayasuriya (0 runs in 5 balls) in the second over of the inning. But after losing these two wickets early, Sri Lankans came in their form and defeated Indians by 5 wickets.

India Team with the 3rd T20 WC half century of Suresh Raina (63 runs in 47 balls) and good struggle by Indian opener Gautam Gambhir (41 off 32 balls) were able to manage 163 for 5 wickets to put the chasing target in front of Sri Lankanks team. Both the openers Dinesh Karthik (13 runs in 12 balls) and Gautam Gambhir gave a solid start to the team. Yuvraj Singh got caught by Mahela Jayawardene. Thushara balled him and Yuvraj was just able to score 1 run. MS Dhoni remained unbeaten on 23 runs. 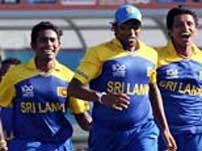 Chasing the target of 164 after losing the two wickets very early; Tillakaratne Dilshan (33 off 26 balls), Kumar Sangakkara (46 runs in 33 balls), Angelo Mathews (46 off 37 balls) and unbeaten Chamara Kapugedera gave their solid contribution in the victory of their team over Indians. Sri lankans hit 44 runs in last 3 overs. Kapugedera made the winning six over the long-on boundary on the last ball which was a full toss from Vinay Kumar.

In the other match of Super-8 stage, Australia defeated West Indies by 6 Wickets.

In this way, the teams qualified for semifinals of T20 World Cup are England, Pakistan, Australia and Sri Lanka. The first semi final will be between England and Sri Lanka on Thursday and the second Semi Final will be on Friday between Pakistan and Australia.