A Muslim clergyman who lives in Europe has given a strange statement for girls. He said that the ladies should avoid eating the fruits and vegetables that resemble the man’s sex-organ. He added that fruits and vegetables such as bananas and cucumbers enhance the sexual thinking of women and so in order to be good in character, they should not eat them.

The unnamed sheikh has also given an amendment in his statement and has not completely banned these items for girls. He said that the first preference for the girls should be not to eat bananas, cucumbers and other vegetables and fruits that resemble the man’s sex-organ but if then also, the girl wants to eat these then these should be cut into small pieces. He further restricted women to cut the bananas and said that only any male should cut them into pieces for them. 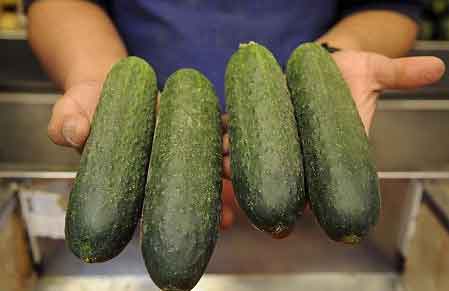 He even warned the ladies to go close to these fruits; else the sexual thoughts will arise in their heart and mind.

When the sheikh was questioned that then how the ladies will purchase from the grocery shop as in the grocery shop, all such items are there; he replied that at that point of time, it will be the woman’s decision. If any girl will make a will to not see these items then also it is almost impossible to not look at them for atleast once also, so the choice is of lady that what she wants to do at that time. He said that the best is to not look at them altogether and avoid any type of contact whether it is physical or just looking.

More,
Read here for Girl who do not brush.

The clergyman further said that if girls like such foods and want to eat them then the best is that it should be cut in a place hidden to them.

To this statement of cleric, the Muslim community is in very much anger. As per the Muslims, the cleric is spreading wrong message for Muslim women.

But some Islamic people say the clergyman as just a man who wants to gather publicity and nothing else.