You might have heard that some human beings have burnt their enemies’ houses. These types of incidents are often seen in Bollywood or Hollywood movies. Sometimes, some accidental leakages or any sort of sparks can cause whole factory or house on fire. But have you ever imagined that a small animal rat can burn any human’s house.

This sort of incident or accident happened recently some days back in Barmer district of Rajasthan state of country India where just one rat set fire in whole house. The fire was so powerful that even fire-brigade was unable to control it easily.

Actually, the family-members were worshipping one of their female goddess on the occasion of a festival. They lighted candle-sticks and went in another room for taking rest. Suddenly a rat came and took the burning candle with it. 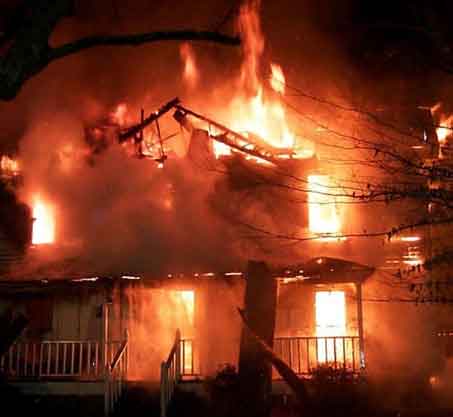 The rat was successful in taking the candle to the bunch of clothes. The clothes caught the fire and the small flame grew into large one.

When the family-members saw the rising flames, they felt very surprised. All the persons rushed to the room from which the flames were coming. When they saw that the fire has spread in whole of the room, they felt helpless and started to scream.

More to check,
• Most Smelling Man
• Man barking as dog

The neighbors came to their help. But till then the whole house was in the grip of flames.

The neighbors and the family members started throwing sand and water on the rising flames. Meanwhile, they called fire-brigade. The fire-brigade team came to the spot and started their efforts in order to control the situation. They were trying their best but soon the water in their van finished and they also became helpless.

Then 2 water tanks were ordered to control the spreading fire. The fire-brigade team continued their work when the tanks arrived. At around 9:30 pm in the evening, the team with the help of neighbors was able to control the situation.

This incident happened near Manak Hospital in a home at around 7:30 am in the morning. The brigade team also reached little late as they found railway gate closed.