Indians know that the corrupt politicians have ditched their country a lot. These people have indulged themselves in these wrong intentions more after independence. It is sad on the part of such great country India that previously Britishers looted it a lot and now these corrupt politicians and industrialists are doing the same.

A shocking survey has recently disclosed that from 1947 (when the country gained independence) to till now, 910,603,234,300,000 Indian Rupees have been eaten by the Indian politicians in the various scams. In words, the money is Nine crore ten lakhs six thousand three hundred and twenty-three crore forty-three lakhs rupees. The money equals to something around 21 million million American Dollars.

This is the reason that India is poor country. And to make you more surprise is that these are the only scams that have been caught by the police and been exposed in the public. Besides these, don’t know how much are not caught. Had all been frauds been caught, I think the amount would have been tripled or tripled five times. Yes, because we all know that only a part of the money that’s been caught is exposed in the public. 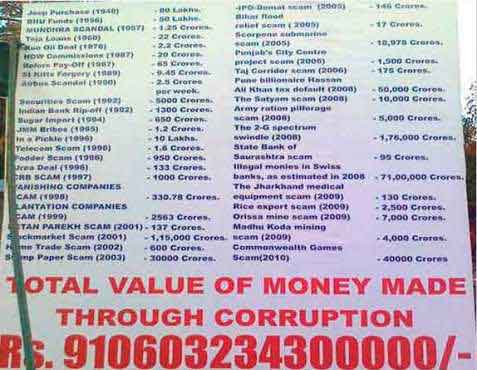 These people are following the same policy and path that those English men followed. Almost daily, we hear the news in television and read in newspapers that some scams have been caught or there are any hands of big names in the scams.

This is really bad on part of any nation – whether it’s developing or developed and also at that time, when we see daily deaths in India due to hunger and poverty. Indians commit suicides due to the shortage of money and it is really a shame on these scammers that eat their own country-men.

Had all such money been used for the welfare of the citizens, I think India would have been become the strongest and most powerful super-power in whole world. But it’s the bad luck of my country that this much capital has gone waste and is going waste since the process is non-stopping. I would say that my country is really unlucky.