Harold Camping, an 89 year old man, who is a preacher from Oakland, California, United States, predicted some time back that the world will end on May 21, 2011. He said that on this day, Lord will come second time on this earth and he will take the 2 % of total world’s population with him to heaven. The remaining people will be transferred to some other place. What he means to say that there would be no human on the planet earth.

Had this prediction be done by any common man, people would have easily ignored him. But Mr. Harold is very much popular everywhere and his prediction is therefore not so easy to ignore.

Mr. Camping is a former Civil Engineer and he owns a religious broadcasting organization, Family Radio Network that he founded in 1950. The reason that his wordings are spread easily everywhere is due to this radio, which has 66 stations in America alone. He runs it via the donations from his followers and has total assets of around $120m. Further his programme is broadcasted in 48 world languages and has thousands of followers world-wide. His Radio Network stations are in Russia, United States, Turkey and South Africa.

May 21 is known as ‘Day of Judgement’. Many billboards are filled with the slogans like ‘Blow the trumpet, warn the people’, ‘Judgement Day – May 21’, ‘End Of World’.

He further adds value to his proof by saying that the recent earthquakes in Japan, Haiti etc. and Volcano Eruptions in Iceland are just the small harbingers of this big doom

On this doom day, all sin, stealing, lying etc. will end.

Some of his preachings like all abortion should end are very popular among US’s religious peoples.

But this is not the first time that he is doing some prediction. Last time, he forecasted that Jesus Christ will come on September 6, 1984 and many of his volunteers gathered in an Alameda auditorium.

Explaining the above incident, he says that he did not researched Bible fully but now he is sure what he is speaking.

Many of his volunteers have resigned from their jobs on this. They say that what the usage of working is when they are going to die soon. 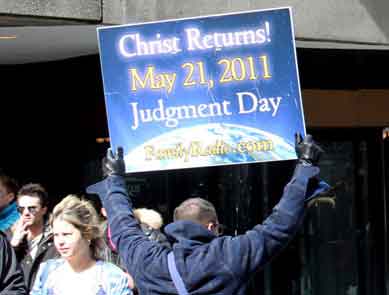 Many people believe that Mr. Harold is wrong due to the fact that they believe that no one can tell about the future. Even Bible says that ‘no one knows the day or hour’.

Harold is trying to recognize something that the Christians believed to be some thousand years before to happen. They believed of second coming of Jesus but now when there is much bigger universe, different culture, different people, land, diversity, everything different; don’t know if those things and events will happen now.

21st May End of World Video