Auto-rickshaws are very common in almost all the cities of India. These vehicles are kept for shorter distances when the people want to travel within some specified area in that city. And it is very rare that they cover more than 100-200 kilometers on one side.

But a person by the name Sanjay Sharma has crossed all the boundaries of this rare activity. He has traveled thousands of kilometers by road on his auto-rickshaw. The person is not a special driver of this public vehicle but infact an IT professional from United Kingdom.

Sanjay is 44 years old and purchased his three-tyre vehicle in the year 2008. He has named this rickshaw as ‘Flying Rani’. It is having a 175 cc engine and the color is yellow and black.

Flying Rani started its long journey from London, England and till now has traveled around 10,200 kilometers. During the journey, Sanjay passed more than 14 countries and is currently in New Delhi, India.

Sanjay Sharma says that he started this long travel to collect funds for the cancer patients and his travel is for charity purposes. 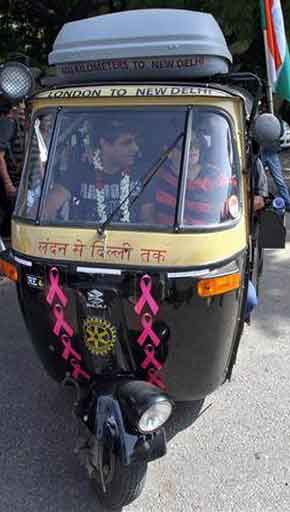 Sanjay says that Flying-Rani has provided him a means of good money in United Kingdom. The Indians living in London used to take this vehicle on rent for marriage purposes. It acted as a substitute for female horse on which bridegroom sits.

IT guy Mr. Sharma says that Flying-Rani has helped him a lot in this long journey. The tyres punctured only once in this travel.

He further adds that the people of every country were very friendly with him. They gave him free sweets and drinks and admired him of doing such a noble cause. Sanjay adds that at many places, his vehicle was offered free petrol.

In this travel, Sanjay was forced to take unpaid leaves but he managed to get around 81,800 dollars (40 lakh Indian rupees) from the public.

Sanjay left his home with his Flying Rani and 2 other friends on 14 July. When he was questioned about all the hurdles that he faced, he said that not much but just the uneven roads of Iran and India slowed his speed. And another hurdle was that his 2 other friends left him alone in the way. One of his friends left him in Turkey and another in Iran and after Iran, Sanjay was alone and that made him little disappointed.

But he added that the greet of peoples was really appreciable and all the local residents admired his courage.