In countries like United Kingdom, United States of America, Australia, New Zealand etc., people are very much fond of keeping dogs and cats as their pet animals. The people in these countries keep these pets happily and take them out for morning and evening walks. These people love their pet animals a lot and always take care of themselves.

In northwest valley, may people saw this view but some of them did not care it. The cat was stuck 20 feet up on the cactus in the middle of the desert. Many hikers near Saguaro Lake and Bush Highway ignored the cat but hiker JD Robbins noticed the pet. Robbins added that it looked as a home-cat and so he called it as pet. 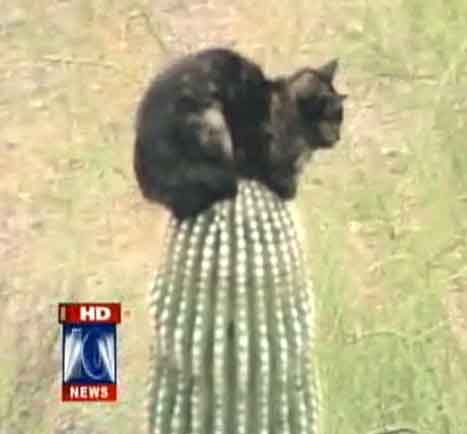 When Robbins saw it, he worried thinking that how the cat will come down. After getting tired from the cameras, the animal came down and then JD Robbins, felt a sigh of relief.

When the residents and hikers, near Salt River in Arizona, spotted the cat on cactus, they felt worried of the animal and started praying for it so that it may come down without any loss.

Cat is the domestic animal and people love it very much and as such, all wanted it to be safe. The rescuers also thought of trying a rescue operation for the animal. But then some of the experts suggested that the rescue-operation could be dangerous for the animal. The reason was that top of cactus was not so wide that any machine could be placed there and also, any human can’t stand on the cactus or any other plant. The other reason was that since it was an animal and not a human being that has many senses and so, the danger was associated with the rescue-operation, so the operation was ignored.

The news was broadcasted on Fox9 TV channel and people saw the adventurous news.