You might have seen the various magic shows in which magicians perform some outstanding tricks and surprise the audiences. They sometimes change the colors of papers and sometimes turn the paper into clothes.

They claim that this is just the illusion of eyes that they do by their hands tricks and nothing else. This is understood if the magician does some small things as explained above but it becomes adventurous and amazing when someone performs some daring and entertaining acts and something that is never seen before.

Such some work is done by the famous magician Steve Frayne which is popular by the name Dynamo.

The audiences were watching this stunt from Westminster Bridge and they stood stunned when he saw them walking on the water of Thames. On watching this act, some claimed that if he tries more, he can even fly and dive into air without any external device. 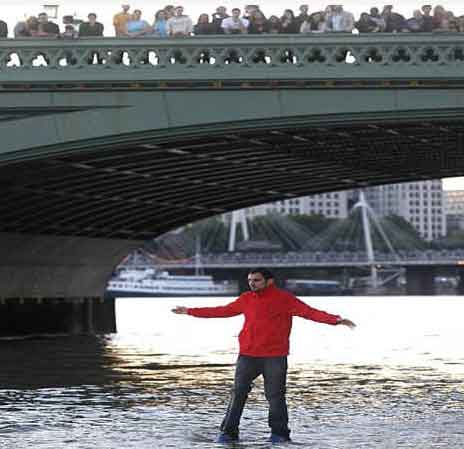 Steve Frayne is 28 years old and is born in Bradford.

This is not the first time that he has surprised the people by performing his magic-trick. Previously he flew Little Britain star Matt Lucas and made Matt float in the air. This he performed at the Arsenal Emirates Stadium in front of a large crowd. Davina McCall and Robbie Williams were present when he turned the tickets into cash money.

He has shown his magic in front of many renowned celebs of the world. The celebrities like to take part and usually participate as audiences in his stunts.

Steve, the magician is gathering the publicity for his next TV programme show ‘Dynamo – Magician Impossible’, which is going to begin from July 7, 2011, Thursday on Watch.

No doubt, this magic task has given him the good publicity and people are eagerly waiting for the show date to commence.
Frayne has a huge list of famous personalities that admire his work and love to see his magic. He says that his godfather is his grandfather who gave him his skills and made him what he is today. Till now, he is been featured in many Television shows and interviewed by many channels, such as ‘Snoop Dogg’s Fatherhood’ and ‘Dynamo’s Estate of Mind’, a channel4 serial.

Initially, he started with some cards-game and cleared his hands on the cards. Then slowly he began trying the big things and now he has even stood on the river water.