When Ed Stafford first decided to cross vast Amazon River of 4345 miles then nobody was able to guess that this could be made possible. People tried to stop him and asked him to not even think of this as according to them, it was impossible and Ed could only end losing his life. Even his friends believed it as something that can’t be done and so tried to stop his way. But Ed was clear what he wanted to do and said that he has firm determination and will do this daring act.

When he left for Amazon, people prayed for him and many others worried that he may not lose his life in the wild. It was obvious that there was complete danger to human life due to the wild animals and reptiles and also due to dirty water. Many also laughed on him and said that he will not be seen anymore now.

Ed Stafford is a former British Army captain and is 34 years of age. He was born in Peterborough, Cambridgeshire in 1975.

He first decided to cross Amazon River when he was involved in the foundation of Research Center in Patagonia. Finally, he made his mind and started his journey on 2nd April 2008 with one of his friends Luke Collyer. Collyer left the journey after three months and asked Ed also for the same. But the man did not give up and decided to cross Amazon alone.

He was doing this for many charities so that the money that would be earned from this adventurous act could be used for the working of charities.

The brave man Stafford had fear of being killed by Wild Tribesmen and also from wild plants. 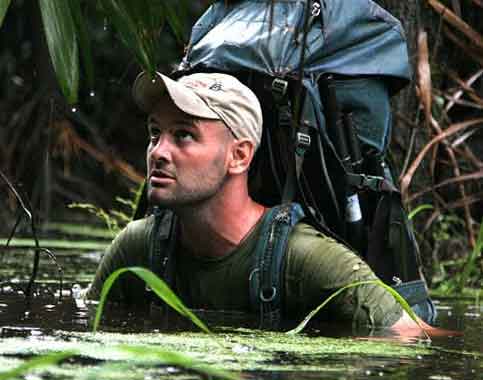 He faced the poisonous insects and plants during his journey. One fly bite him on his head and made its home in the head. Some wild tribal people caught him and pointed their guns on him. They were about to kill him when Stafford started persuading them. He was successful in calming them but it wasted his almost 3 hours. Those 3 hours arguments were very difficult for him.

The man found a guide in Peru Gadiel Rivera, nicknamed as Cho.

Ed adds that the most dangerous and most difficult part was when he and the guide Cho was in Peru and was crossing the Drug Smuggling area.

He further added that the sea animals and especially snakes can be a danger to you in the forest but if you don’t step on them then you are safe. They will not harm you if you do not say anything to them.

Some local tribal people thought him as a monster and caught him. They thought that he deals in human body parts. The brave man Stafford told him about his mission and then they allowed him to go.

He walked around 6000 miles, something 9 million human-steps and made his name in Guinness Book of World Records on 9 August 2010 after walking continuously for 859 days. In the journey, more than 200,000 mosquitoes and flies cut him on his body parts and more than a dozen scorpions also made difficulties in his path.