Yesterday on 11 August 2011, a unique marriage happened when a male frog married a female frog. This all happened in Jodhpur of Rajasthan State in India. The news spread so rapidly and became so popular that the people came from far away places to participate in the wedding.

More You Like,
• Speaking Parrot
• Boys changing sex for marriage

This exceptional wedding was held in a temple in Geeta Building. All the proper arrangements were done and the function started exactly at 9 am in the morning. The temple was decorated with the beautiful flowers and the road joining it was properly cleaned by the villagers.

The wedding was funny and a good entertainment for nearby people, especially the children, who enjoyed a lot in this function. 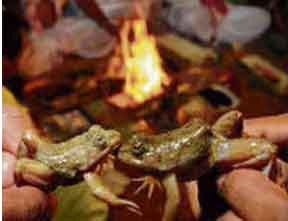 The marriage ceremony was done in a proper manner, as some rich man is marrying a girl. Many chief guests were a part of this ceremony and they showered their blessings also to both male and female frogs.

Special clean and bottled water was arranged for the frogs and they danced in that.

All had a great fun. It was a good event. The organizers said that the people started gathering a day before the said date. Everyone tried their best to reach on time, so that they didn’t miss this festival.

The relatives, friends and others who gathered at this wedding ceremony were given good treat. Some people brought small clothes for the female frog and some for the male frog.