A man in Sitamarhi of India is now-a-days gaining much popularity due to his recently discovered hobby. He is a poison-man who loves himself to bite from the dangerous reptiles; snakes.

All of us know that the snakes are very poisonous and if they cut on any person’s skin, he or she can die at the moment. But the surprise is that Vinod from Sitamarhi is fond of this thing and he deliberately takes the snake in his hand and lets it to cut through his skin. And this is not that he does once a month or week but infact on daily basis.

Vinod says that he needs snake-poison before sleeping. He is not able to sleep unless he not cuts himself from this long lizard family reptile.

Instead of letting the man go away from the village, the local residents of the village have developed a great faith in him. They have started calling him as a doctor.

This Poison-Human is also acting as a doctor and if the nearby snake bites any person then the villagers brings him or her to this man. Vinod sucks from the attacked area and the person starts feeling healthy again. This is beneficial to Vinod also as he gets the free poison. 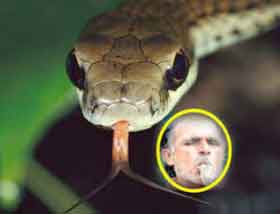 Vinod tells that he had attraction for snakes since his childhood days. During childhood, he used to run behind the snakes and slowly he started catching them. And now he catches them and wears them as a garland in his neck.

He has special love for wheat-color snakes. He keeps them in his mouth and then closes his mouth. Initially he had some problems from the snake-biting and he experienced some pain also. But slowly, it became a habit and then it converted into hobby.

The Poison-man keeps these dangerous reptiles with him always and when he want, makes the reptile to bite the human skin.

Sometimes this dangerous reptile doesn’t bite him and then he keeps it in his mouth, so that it may cut him.