A man in Jodhpur city of Rajasthan in India claims that his beard is the strongest beard in the world and he can do such things with it that common man can’t do even with their hands and body.

More Interesting news,
• Couple Kissing
• How to know if boy is Gay

The person name is Kapil Gehlot and he lives near the Mahamandir in Jodhpur. He did this adventurous act in the open park. He wore the skates in his feet and tied the car with his long beard. Then he forcefully pulled it. He was successfully able to pull it to more than 60 meters. The exact distance was 200.5 feet which is equal to 61.69 meters.

Ajit Singh, the member of Rajasthan Adventure, Sports and Cultural Welfare Society; said that this is not the first time that Kapil is doing some strange work. Prior to this, he ran continuously for 30 hours wearing skates. 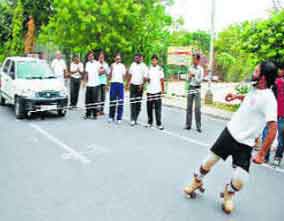 Mr. Gehlot is a hockey player and has also played hockey game for continuously 30 hours.

He said that his body is capable of resisting many strains and it can do what the normal humans can’t. He said that he never tires and his body is way away from fatigue. His hairs on the face are very strong and also resistible to pain. And this is the reason that they can pull heavy vehicles without any stress.

Various main persons of the area were present when this alto pulling work was being done by the famous beard so that later no one can suspect his claim and he can pave his way for Guinness Book.