The famous magazine Forbes has declared the top-most wealthiest persons on earth and has put the names in a list. In this 2010 list of Forbes, there are some old faces like Warren Buffet and Bill Gates. Indians need to be proud on some of the Indian personalities like Mr. Lakshmi Mittal and Mukesh Ambani. The surprise is that this time, a new name Carlos Slim Helu has made its entry in the Top 10 wealthiest persons list. And to more surprise is that the person has made its name on number 1 position. He is now from nowhere to Number – 1.

Here is the list of top ten richest people in the world. More information you can get from here Forbes
1.) Carlos Slim Helu – Mexico – 53.5 billion
Sources – Telecoms
Fact – Donating 65 million to fund research for genomic medicines.

2.) Bill Gates – The United States – 53 billion
Income From – Microsoft
Fact – Mr. Gates now does not manages his founded company Microsoft on daily basis. Instead now he works on the tasks for the welfare of humanity with his wife Melinda. Both spend their time in the human welfare works and say that they feel very good in doing this. Mr. Bill Gates is very proud of what he is doing now. 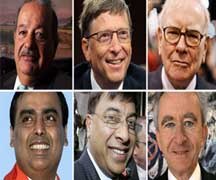 3.) Warren Buffet from America – 47 billion
Source – Investments
Quote – “We have put a lot of money to work during the chaos of last 2 years. When it is gold-rain, reach for a bucket, not a small metal cap.”

6.) Lawrence Ellison – USA – 28 billion
Sources – Company Oracle
Info – Studied at the University of Chicago but unfortunately or fortunately did not complete the graduation.

9.) Amancio Ortega – Spain – 25 billion
Origin – Fashion retail
Facts – You will be surprised to know that this person hates the Neck-ties.

10.) Karl Albrecht – Germany – 23.5 billion
Generator – Supermarkets
Concept – Has more than something around one thousand superstores in United States of America.