When it comes to staying online while you’re on the move then the choices are pretty much endless, although deciding on the right gadget for your needs is often less than straightforward. It’s important to first decide how much you think you’re going to need internet and email access before deciding on the type of device that’s going to fit the bill best of all.

If you’re a business professional who needs to do a days work while you’re on the move then a traditional laptop has always been the best way of getting things done. A larger screen size and full keyboard, plus a beefier technical specification allow greater productivity. What’s more, many mobile broadband providers will give you a free laptop as part of a deal in many cases.

However, any one of today’s netbooks is getting faster and more efficient. Although they have smaller screens, they’re much more portable and could be the answer to your needs.

More Tutorials,
* How to Secure Wireless Network
* How to create own Theme in Gmail

Another option
However, the world of tablet computers is really starting to steal the show when it comes to staying productive on the go. Many workers are now adopting devices such as the Apple iPad and Samsung Galaxy Tab, alongside other lower priced tablets, in order to enjoy quick and convenient internet access on the move. The great thing about something like the Apple iPad is that it can be bought as a Wi-Fi version and also a 3G mobile broadband edition too. 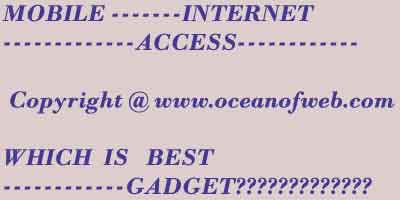 If you want to stay connected to the internet on the move and money is tight then using free Wi-Fi is always a great way to go about it. Many locations now offer this for nothing, although people who need even greater flexibility will want to bag themselves a tablet that also comes with 3G mobile broadband functionality. This means that you’ll be able to stay connected long after you’ve gone outside the range of a free to access Wi-Fi router.

Small is good
On the other hand, if you’re someone who simply wants to stay connected to the internet in order to post social networking updates, check details on the web and send and receive emails while in transit, then the humble smartphone is perhaps one of the best ways of going about it. Now that there are countless smartphones that are endless reliably, such as the wealth of HTC or Samsung handsets powered by the Google Android operating system, this is a great way forward.

What’s more, smartphone providers are also offering amazingly competitive deals whereby you often get a free handset and a healthy data allowance in exchange for a monthly contract. They’re smaller, and consequently have tinier screens and keyboards, but if you’re looking for computing power plus the ultimate in portability, then the current range of smartphones on the market truly take some beating. Added to that, you’ll often find that some of the models now have screen sizes in excess of four inches, allowing for quick and easy productivity as well as being ideal for playing back movies, music and other on-the-go entertainment.