Do you think that you spend hours on facebook and orkut? If you think so then you are not only one in this category.

According to the new report of Nelson Online, Social Networking, blogs are becoming more popular than email.

According to the study, 66.8% of Internet users across the globe accessed “member communities” last year, while email remained on 65.1%. Search topped with 85.9%, which is 1.9% increase as compared to last year. While the report does not show much difference in Search (85.9%) and Portals and communities (85.2%).Websites of Software Manufacturers was 73.4%.

Rank remained same for all the five most popular sectors except for Member Communities and Email which swapped their ranks. 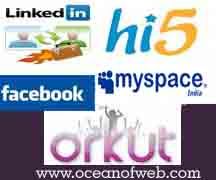 The report further revealed that Germany saw the greatest increase in online reach of Member Community websites while Facebook has replaced MySpace as the world’s most popular social network.

Facebook topped in Global Unique Audience with 108.3 millions while Myspace with 81.0 millions, which is 29.9% of global Internet users versus 22.4% for MySpace. Third remaining Clasmates online (19.7 millions) while Orkut (17.5) and LinkedIn (15.0) were on 4th and 5th ranks respectively.

Also, Facebook has the greatest online reach in UK and Italy.

Key findings from Nelson Online Report
1. Member Community growth is twice that of any of the other five most popular sectors.

2. Germany has seen the greatest increase in online reach of Member Community websites.

3. The total amount of time spent on Facebook increased by 566%.

4. Switzerland has seen the greatest increase in share of time accounted for by Member Community websites.

6. The audience composition of Member Community websites is shifting from the young to the old.

7. MySpace and Bebo attract more advertising activity in the UK than Facebook despite having a smaller audience.

9. Facebook and Linked In have experienced large relative increases in global  online reach.