While addressing a press conference in Mumbai on Friday, April17, Bharatiya Janata Party’s prime ministerial candidate L.K. Advani on Friday uttered the name “Obama Bin Laden” instead of Osama Bin Laden. In a slip of tongue, BJP’s senior leader Lal Krishan Advani said that after 9/11,US has also realized that Al- Qaeda Chief Obama Bin Laden may have access to secret funds for his terrorist activities, which he used to bomb the world.

Mr. L.K. Advani said this in his slip of tongue by mistake. The whole assembly was unable to get what the senior leader was speaking. Advani himself then realized what he spoke and became little nervous as this could become a big issue and the opposition party could make it a political issue. It can lead to controversies as the person whose name was joined to World’s biggest Terrorist was not a small person or a common man but he was the most powerful person of the world, the president of United States of America.

It was obvious to get little scared as it was a big tool in the hands of opposition to create fun of him. The Congress and other political parties of India could use it to defame the image of Bhartiya Janata Party’s senior leader. 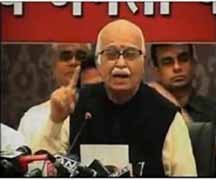 Lal Krishan at once realized his mistake and soon changed the topic and started speaking something else. He left this discussion at once. Making a clever turn, he deviated the topic in front of everybody and was able to successfully turn the audience mood.

But the fault is fault. At that time, people didn’t raise this question but later the news broke in media and local newspapers printed this news.

The people who were hearing the speech at that time told the news to their all relatives and friends, whom they know.

It was looking as LK is sorry for what he has spoken and more than Indian citizens, he had a fear of being ashamed in front of the world that he doesn’t know how to pronounce the name of the person who is known to everyone. He doesn’t want to degrade his image in Global Media and want to be a good personality among US citizens too.

Advani also stressed on the need for creating a national consensus to bring back the Indian money hidden in secret Swiss Bank Accounts. He said that the old money of India is lying as wastage in the Switzerland banks and that should come to the country at any cost. He laid stress that the corrupt politicians and big industrialists have deposited their black wealth in the international lockers and don’t want to use it for the welfare of poor people of India. If that useful money be spent on the population, then poverty can be removed at a much wider level. The money should be brought at any cost.

As part of multi-phase elections, the first phase of polling was held in 124 Loksabha Constituencies spread across 17 states.  In this first phase, 1715 candidates (including 122 women) fate were in the hands of around 143 million voters.