The Wednesday, 13 July 2011 shook India’s Bollywood town Mumbai as 3 consecutive bombings was experienced in just a short interval of time. The bomb explosions shook whole India and even abroad. 21 people were reported dead at the moment and more than 150 were reported injured.

This is the worse terror attack since the unforgettable 2008 attack at Taj Hotel by Pakistani terrorists. One of those terrorists, Ajmal Kasab, arrested in those firings is still under the police custody. He is in Arthur Prison of Pune.

The first blast was observed in the Jewelry Market of Jhaveri Bazaar in the evening at around 6:54 pm. Just after a minute at around 6:55 pm, Opera House business district was hit by the explosion. The third one occurred in the Central Mumbai in Dadar after 10 minutes i.e., around 7:05 pm.

The streets were seen with the red-color dead bodies lying all around. If somewhere the empty space was present and no dead body was lying then the sand of that area was red atleast. The red color was itching in the Mumbaians eyes.

The explosions were so powerful that they detached the doors from the houses and shops, a bus stop was sliced completely and various vehicles were burnt to ashes.

The Mumbai blasts occurred in the three different areas. After the blasts, a high alert was set in the area.
No terrorist group has taken the responsibility of such attacks of Mumbai and who has done all this is still a question for the government.

After the unforgettable and devastating 26/11 terror attacks, Pakistan and India’s relations deteriorated to a much wider extent. But recently some months back, the two nations started talking to each other peacefully. And now again this incident; the relations can now again go apart. 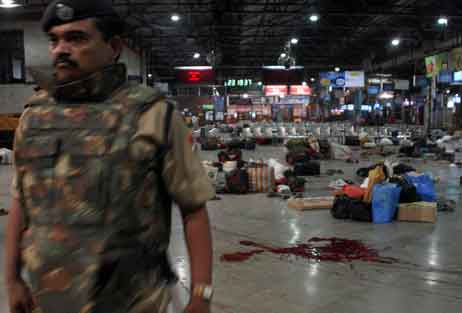 However still the actual defaulter is unknown but then also the local people believe the hands of Pakistan in this. One of the reasons for these suspects is that recently also, the same country was responsible for all such human-destruction.

Some believe that these are the birthday wishes to Azmal Kasab by Pak’s terrorists. Ajmal is born on July 13, 1987 and yesterday was his 24th birthday. So his terrorist friends have given him the gift in form of human lives deaths.

All the leaders have condemned this Mumbai blasts act. Prime Minister Manmohan Singh has asked the countrymen to handle the situation with peace.

Congress party leader Sonia Gandhi has said that the terrorists would soon be arrested and punished. BJP Leader LK Advani also said that the incident is really untolerable and his eyes filled with tears when he first heard of the serious bombings.

Pakistan has also expressed its condolences for the families who have lost their relatives and friends and said that it is with all of them.

United States of America president Barack Obama condemned it vigorously and said that the persons who have done this should be punished soon. He said that whole America is with Indians and it will give the country every possible help to provide justice to the victim families and persons. He said that US wants justice for everyone.

Secretary of State Hillary Rodham Clinton added that inspite of the bomb attacks; she will visit the developing country next week. She added that at this very point of time, Indians and India needs her more and so she will definitely try to help them.

The other countries including France, England, and Canada have also condemned and criticized the terror attacks.