Social Activist Anna Hazare is on fast and his fast has entered the second day. He has asked the government to make a new law against corruption. He says that he will continue to fast till his death.

Anna says that Lokpal Bill is pending for the last 42 years and now he can’t wait anymore. He has asked the government to complete its commitment to Jan Lokpal Bill (Citizen’s Ombudsman Bill).

As per him, the government should form a joint committee including 50 % officials and 50% should be the citizens and intellectuals. They should all work to draft the Jan Lokpal Bill. Only civil society can prove his expectations.

He said that his fast is fast-unto-death and only death can break it.

Till now, no govt official has reached Anna’s spot and on asking about this, he proudly says that he doesn’t trust any govt people or the govt as a whole. He is not expecting them to come to him and is not waiting for them. He said that his country’s people are supporting him and People will teach the Indian government a lesson.

It’s to note that thousands of school-college students, young people whether they are salaried or businessmen, ladies (both working and house-wives) and many old all over the India have joined his campaign. People have started going to him to join him. Protests are being organized all over the nation. All are asking that govt. should enact a new law to overcome the corruption. 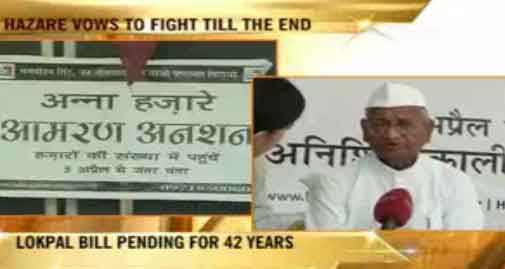 When Mr. Anna Hazzare visited Rajghat in Delhi and then India Gate, many protestors followed him. As per people, if he is trying to focusize the common man’s attention toward this corruption, he is not doing this not just for his reputation but since this autumn, the nation is facing a flue of corrupt officials in the Indian government and that should be stopped at any cost. The Commonwealth Games, the on-going scandals, and the money eaten by politicians all have aroused public anger.

Hazzare and other activists supporting him hopes that the Jan Lokpal Bill, if passed, will be able to fight against this corrupt officials and corruption. It will act as an Anti-Corrupt Fighter. They say that the bureaucrats and politicians are misusing their powers and their bill tie a knot to them.

He says that their should be an independent unit – Lokayukta in each state and Lokpal at the center. These units would be independent to the government just like the state and central govt. No other minister, whatever his post and profile may be, able to interfere in its investigation department. Moreover, its members would not be selected by politicians but instead by citizens, judges and constitutional authorities. The selection process would be completely transparent to all. He wants that representatives of civil society must be included in the committee used to draft the bills.