Today’s world is a world of innovations and daily surprises. The surprises are propelled and orchestrated by science and scientific developments which are happening at an accelerated pace these days. Internet, mobile telephony, text messaging, satellite communication are all examples of the latest inventions which have microscoped the distances and the human race. Human relations have been strengthened in their way. However the age of modern inventions is quite capable of surprising us all in ways we could never even conceive off in earlier times.

Not many days back I was fascinated by my friend’s use of mobile telephone in texting to his friends. Almost every day he used to boast of his friendships with a wide range of girls. It was quite common for him to show us the text sent by him to various girls and the return texts of his female friends received by him. We all were a group of friends who were much impressed by his achievements and cherished the idea of being like him one day. By that time I neither possessed a mobile phone set, nor would my parents allow me to purchase one due to the fear that it will drastically ill affect my studies but now I was yearning for the mobile set acquisition at any cost.

Also see,
Misapprehension At The Cinema

To cut the story short I insisted that I must possess a mobile phone like my friend. My parents ultimately succumbed to my pressure/ desire but conditioned its purchase to getting of over 90% marks in the upcoming midterm tests. I studied hard day and night and managed to achieve more than 90% marks in the midterm. My parents, left with no alternate thus had to buy a phone for me. I purchased the best phone and started using it. Next effort was to find a girl who could text me too. I started waiting for an accidental text from a girl but it never came, I had almost lost the hope that one day I received a text with a girl’s name typed at end of it. It was as if I was the luckiest guy, we two started excessive texting but whenever I would insist on talking live, the other person would say let’s pend it to our meeting. It would always discourage me but as I had no choice so I kept waiting patiently for the fortunate day to come.

Many a time I asked her to arrange the meeting at an early date but she would always come up with an excuse. Whensoever she would refuse, she would always try to raise my morale by sending me jokes, beautiful pictures and some interesting event which had happened with her in the college. I was so absorbed in her writings that I could easily accept all refusals from her and never ever thought of abandoning her. Finally that fateful day arrived when she told me of her availability and told that she had a bench in Rose Garden as our meeting place. I wore the best dress I had in addition to wearing best perfume purchased by me a week back. 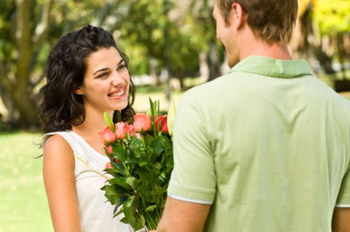 At the given time I reached at the location, no one was there.  I waited for long and when my patience was wearing thin, I received a text to look for the person behind big banyan on my immediate back. You know what I saw there and why the person there burst in laughter. The person standing there was my DESKMATE in the college and was laughing hysterically. I was so shocked and embarrassed when he said look I am your GIRLFRIEND. Anyway soon I overcame the shock and burst into endless laughter. We really enjoyed the whole episode and even now burst into laughter when we recall the incident.

What had actually happened was that he was a mobile phone user before me and realising my longing for a girlfriend, had thought to turn the whole episode into an interesting event which would make us happy whenever we recall it in later years and that is what actually happened.