The day Social Activist Anna Hazare has started a movement against anti-corruption and went on his fast-unto-death, he is getting famous among Indian crowd. All political parties are going against him and they want to suppress his anti-corruption movement and his Jan Lokpal Bill.

Hazare said that all the corrupt political leaders are afraid of this Lokpal Bill. The huge support that this bill is getting from people of India is taking away the sleeps of such leaders. They want to misguide the common man against this bill so that their wrong intentions not fail.

He said that all politicians of India are not corrupt but mostly are and if they are right at their place, then why they are worrying of this bill and the support of people to anti-corruption. The politicians who are good should raise their voice against Corrupt leaders and should support Jan Lokpal Bill rather than criticizing it. And keeping silent also is indirectly supporting corrupt leaders and corruption and such leaders are also of no use for any country. 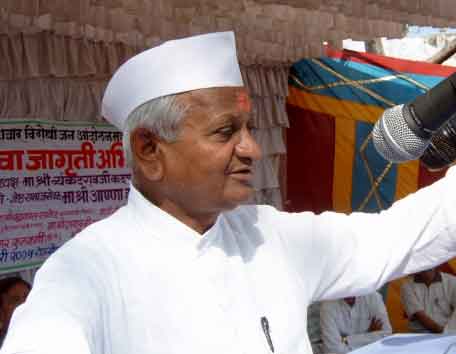 Anna said that the dishonest politicians are making false statements against him. He never said that people who vote are corrupt. The 73-year old social activist believes that the leaders are responsible for any country’s progress and decline. So, they should come forward and do something good for their nation. These politicians earn plenty of money and distribute only a part of it on the needs of common man. They eat whole sum and common man’s condition remains unchanged. The leader should be of good character and committed to work for the public, of the public and by the public.

I am with Anna Hazare and you?