Animal Health World organization (OIE), in its continuous efforts, has launched video-campaign series in order to motivate the organizations and countries to destroy their deadly virus Rinderpest stocks completely.

The virus by the name rinderpest is one of the most dangerous viruses in the world. These viruses attack directly the cattle and other animals, resulting in the painful death of these animals.

The humans, infact, will not be the direct prey and will not be infected by any such epidemics; but the human-race will face a big disaster indirectly. The death of cattle will have one of the biggest negative effects on the health and living-standard of humans. The prices of all the commodities will rise to sky-level. Further, such increase in the prices will lead to jostling of human-beings lives and livelihood.

OIE is been urging all the countries of world to destroy their rinderpest virus gatherings immediately and that too completely. Moreover, OIE along with FAO, the United Nations Food and Agriculture organization, has appealed the countries that if they cannot kill the epidemic-spreaders; then atleast they should store them in the approved containers only and need to keep them at proper safe places.

In May 2011, there was an OIE General Sessions in which all the member countries of World Organization of Animal Health pledged to either vanish these disease-spreaders or store them in highly safe labs. 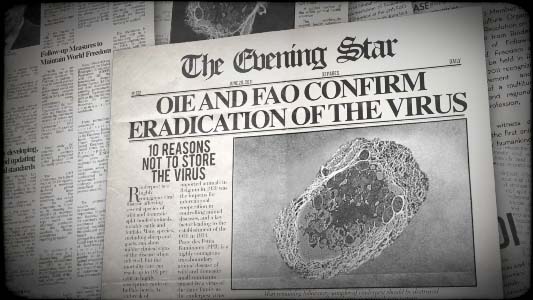 But in contrary to this, still this cattle-plaque is been in over 40 laboratories of the world. If by through any means, this Rinderpest comes out in open; it will for sure make the cattle its foremost prey. And if the disease is entered in any of the animals then slowly, it will start covering other animals too. And, then from city to state, from state to country and soon, whole world will be caught in the non-releasable jaws of cattle-plaque.

In order to avoid all these havocs, Food and Agriculture organization and World health of Animals organization are urging its all member countries to work with them and support them fully from heart. To achieve this noble cause, the both entities have made a committee of seven members whose aim is just to eradicate this evil from spreading. They all are requesting their member nations to respect their wordings which they committed in May 2011 session to kill this virus-stock completely. As per the committee members, the saddest thing is that inspite of passing of more than a year, the member-nations has still not even kept the rinderpest in safe and authorized containers and at proper places.

Rinderpest Virus risks and why to kill it

Virus Video
Below is the official video that is been released with United Nations support. The video elucidates the after-effects of deadly disease, if it is spread.

Why to not store Rinderpest Virus
Below are some of the reasons that any country should not keep the stock of this epidemic:
1. Suppose any nation is keeping this time-bomb and by any ways, knowingly or un-knowingly, the virus is able to free itself then that country cannot be treated as safe and a black question mark would be imposed on its safety.

2. The infectious cattle-stock will lead to drastic political problems.

3. Along with political issues, there would be severe financial crisis.

4. The animals would be treated skeptically as by naked eye, a common man cannot differentiate between healthy and unhealthy being.

5. People will stop eating animal-based products and as such, the animal-products manufacturing market will suffer huge money losses.

6. Various breeds of wild-life will start to extinct.

7. Population of wild-life will see a huge drop.

8. A need will arise to launch a campaign and that too a complete successful one as failure to be success in that movement will be a huge and unrecoverable loss to mankind.

9. The nation’s image at international and national level will finish.

10. The costs involved in launching a new campaign and making the country disease-free would be very high and as such, big sums of money will go waste.