The favorite hobby of most of the small children is playing. Children love to play most than any other activity like studying, watching movies etc. I remember my childhood days when I used to play through whole day from early in the morning till late night. Small kids don’t care whether it is cold or hot. They play as a passion. And it is good also for their health.

But an eight years old girl Hannah Harpin living in Huddersfield, West Yorkshire, England fear of playing in hot. The reason is that she is suffering from a strange disease called Hay-Wells syndrome, which is a type of Ectodermal Dysplasia. Her sweat glands do not work properly due to which they fail to emit sweat in the hot.

The disease is very rare and there are only about 30 people all over the world and only 8 in United Kingdom that suffers from this disease.

The parents of Hannah are Richard Harpin and Wendy Shires and they take extra steps to take care of their 8 year old daughter. They almost always remain with her and specially takes care that their daughter never faces such heat that could be a danger for her.

The father and mother always keep spray of cold water, ice and a fan around Hannah. She always has a fan on, doesn’t matter where she is. The mother takes special care when the daughter plays in garden for some time. As soon as the sun shines more for some time, Hannah Harpin is forcibly taken inside the home by the mother. 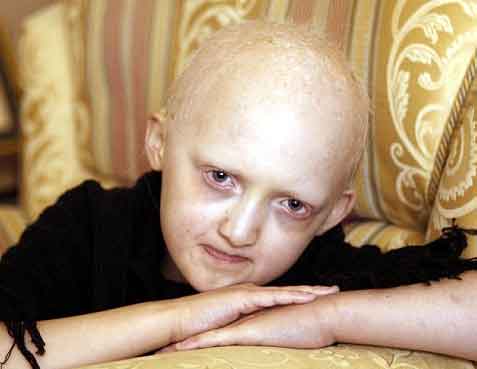 Little girl Hannah has almost no hair on her head and she also has problem in opening her left eye. She uses a Hearing Aid.

When the parents consulted doctors, they were told that this is a genetic disorder and it might have occurred in the family some 100 years back. But both Richard and Wendy Shires don’t remember exactly anyone with such a disorder in both the families in the last 100 years. But they say that it could be to someone in their old family members who have left this world.

Wendy Shires and Richard add that they are very much proud of their daughter who is so brave to cater such a condition.

The school of Hannah Harpin also looks properly to her and they also know how to behave with the little girl student.

She has a younger sister Amelia (age – 4 years) who sometimes questions her parents that who is special amongst 2 girls. The parents then answer that both of them keeps equal importance in their lives.

Small girl Hannah Harpin wishes to attend Jeans for Genes Day that will be on 7 October in Cheltenham to see and meet another 2 girls who are suffering from the same disease.