Mobile Phones have now become the basic need of any human being. Even the hawkers and vegetable-sellers have started keeping the mobiles now-a-days. Previously, common saying was that man needs food, shelter and cloth for the survival but now the man can’t depend on just these 3 things. The basic amenities of common man has also increased. People need now vehicle for traveling and other things as well. The rich people travel on their cars and if the person is poor then he/she owns bicycle atleast.

With the growing need of cell-phones, the handset designs, colors and features have also increased and continuously new features are being added to them. The cost price is decreasing and humans are getting new features in lesser amounts. And with this, many young boys and girls’ purchases new colorful sets having advanced features in them.

You also might be having some good handsets and if you are having good amount of money then you might be the proud owner of some of the costliest models. But do you think that your set is very much pricy. If yes, just scroll below and compare the prices with one that you are owning and with one that is shown in the below list. 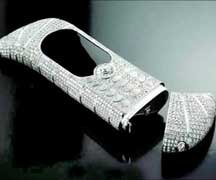 As per the data stored in the Guinness Books of World Records, this mobile phone is the precious one on the earth. It is made of diamond of 120 carats.

Vertu’s Signature Cobra comes on the second number. Besides this, Vertu is also making ‘Ruby’, that is little cheap and will cost something around 115k dollars.

This mobile from Sony Ericsson is just $10,000 cheaper from Signature Cobra and comes on number 3.

Again, Vertu is on this list with its Diamond model that would be charged for $88k.

Nokia, which was one of the biggest market acquirer once, has made Nokia 8800 from 24 carats gold. So, if you are a big fan of this dying Manufacturer Nokia then you can buy this 8800 🙂

This handphone’s body is covered from wood all around and has buttons of titanium.

Samsung and Bang & Olufsen have developed Serene, which is the cheapest of all the costly cell phones that make their names in the list.