If any person goes to Temple, Mosque, Church or Gurudwara or any other such holy place and even at such places, he engages himself in wrong deeds then what’s the use of going there. Atleast at such places, he should stop all this. He should not forget that he is in GOD’s home now.

I was moved on when I saw the below video where a person is stealing money from Gurudwara and filling his own pockets.

These types of persons should be exposed in front of everyone.

The video is in 2 parts. 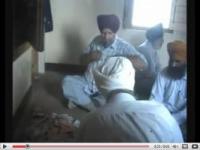 I can see that the videos have been removed by youtube team but does removing videos can hide the sin that the person has created. NO, that can’t be hidden. The stealing and that too from GOD’s home is really intolerable and should be avoided at all. I would say that he should be punished or atleast some CCRTV cameras should be placed so that no one could dare to repeat this sin again in the future.

What you all people say? Should he be given punishment or not?

Is removing the video from youtube a solution to this issue?