But have you ever thought that there exists a festival of throwing this vegetable on others.

And you should do this. It’s a fun and a fest that the government asks its citizens to do. Govt themselves give it to the people asking them to throw it on each other may be he/she his/her friend/relative or enemy.

Such a fest is celebrated with full joy in Spain. People forget their all quarrels on this day and they just remember to have fun on this day. They bath in this liquid and become all red. They don’t care that they will all be sticky but they just enjoy playing it.

Spain celebrates its Tomato-throwing Festival, popularly known as La Tomatina, every year on the last Wednesday of August in the town of Bunol in the Valencia region.

At noon, municipal trucks dump about 130 tons of ripe, juicy tomatoes in the towns’ main square. Children come out of their homes to see the loaded trucks and when they see the dumping, they clap and cry with happiness. 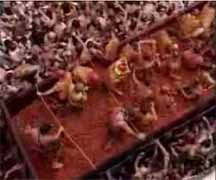 Truckloads of tomatoes quickly turn into puree. Around 40,000 people from different parts of the world come together in the town of Bunoi in Spain to participate in the world’s largest tomato fight. People then start hurling tomatoes at each other. People are covered all with plum tomatoes, wearing protective safety goggles. Wearing the goggles and covering the eyes is considered a must to wear as otherwise puree can get into the eyes and can cause pain in them. So, it’s mostly preferred to have full fun of the extraordinary event that’s played only in this country.

It is tradition for the women to wear all white and the men to wear no shirts. This festival started in 1952. Children, youngsters or old all follow this dress code. Some men wear only half-pants and other full ones but shirts are avoided by all, whether small or big.

The authorities seem more concerned with cleaning the town than cleaning the visitors, so some people prefer Bunol River to wash themselves. Most of the persons bath later in the evening in the river while very few of them go to their own homes and wash their body from the red juice.

The event began in the mid 1940’s when a food battle broke out between youngsters. A vegetable stall was nearby in the town square and they started throwing tomatoes at each other. And, in the coming years it took the form of a festival.

The government also instead of punishing the boys welcomed this new event and made everybody’s day.