Yesterday on 19 May 2011, Thursday, the list of 58th Bollywood National Film Awards was announced. Dabangg, the Salman Khan movie was awarded for most entertaining the audience. Actress Sonakshi Sinha was surprised and said that she is very happy and added ‘Kamaal ho gaya’. Salim Khan on this said that the credit for this film goes to the whole team and his family. Ishqiya got 4 awards.

Tollywood was not able to keep itself away from the winning ceremony. Aadukalam, a tamil movie was selected in top 6 categories. It also gave the trophies to its director Vetrimaran, who also got Best Original Screenplay. TE Kishore was selected as Best Editor, Dinesh Kumar- best choreographer, Dhaush as Best Actor and V.I.S. Jayaraman were mentioned specially. Adaminte Makan Abu, a Malayalam film got 4 grants and Salim Kumar was named as Best Actor for this film. He said that he is not able to express his happiness on this achievement.

Tollywood got total of 14 honors, including the Best Actress for Saranya Ponvannan for Thenmerkku Paruvakkatru that also grabbed Vairamuthu the best lyricist and was named as the best movie.

The filmmaker of Bollywood JP Dutta was not able to pronounce the names of south side directors, actors and actresses and said that he is very sorry for this and will take care of this in the future. He admitted that he should have practiced to call the correct names before coming on the stage. 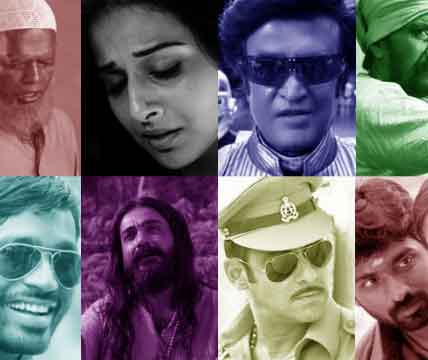