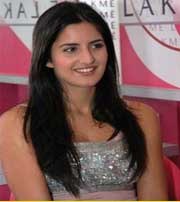 Katrina Kaif, an Indian supermodel and acress, was born in Hong Kong on July 16, 1984. Today is 18th and this post should be on the same day but actually got stuck with my other work and was unable to post. Sorry to Katrina and to all her fans too including me 😉 But anyways, Happy Belittled Birthday Katrina Kaif. She is 25 now.

Katrina’s father was a Kashmiri, an Indian who later married an English girl and acquired British citizenship. Katrina has 7 sisters. Nickname as Kat, she is 5′ 8½” (1.74 m).

Katrina started modeling at the age of 14 when she was approached for a jewelry campaign in Hawaii. Thereafter she continued modeling in London. Later, she was signed for the bollywood movie ‘Boom’ by film-maker Kaizad Gustad, in which she faced Indian audience harsh words of being exposing too much. She was also deeply criticized for not able to speak Hindi properly. Professionally she started off as a model with photographer Atul Kasbekar, and received offers from LG, Cola, Fevicol, Lakme, & Veet, especially Lakme commercial got her noticed. Recently, she also represented as a Barbie-doll.

Katrina, with her hard-work proved all predictions of not able to become a successful actress wrong. She has taken Hindi and dancing lessons to fit in for Bollywood.

She enjoys acting, modeling, dancing, playing chess, watching movies, painting, resting, going to spa, gym, meeting new people and getting together with friends. Katrina Kaif was  the most searched Bollywood celebrity on Google in 2008. She is the most photographed woman in India. The famous Rs. 2 lakh ($4,814) worth silver dress that she wore in the movie Welcome (2007) was gifted to her by Emilio Pucci.

Katrina denies to speak of her personal life, especially that related to her boy-friend Salman Khan. Recently, several rumours related to her marriage with Salman arose but don’t know when Salman’s luck would give him Katrina 🙂

Katrina is also active in various charities and often visits orphanages and hospitals.

* There was a world poll on 100 sexiest ladies of India and she was on number 1 in that poll.

*Again in same year 2008 for Zee Cine Awards, she was awarded as ‘British Indian Actor award’.

*For ‘Maine Pyaar Kia’, she got the ‘Female Star-Dust Break-through Performance Award’.

Once again, Happy Billtled Birthday Katrina Kaif. If you too missed wishing birthday to her, you can wish her here 🙂