Everyday all of us experience various events which we all find quite surprising yet entertaining simultaneously. A few of these events are so joyful that one can’t forget them even if there is no particular interest of keeping them in mind deliberately. Some of the people around us perform various acts which no one can even think of, such experiences when observed with your own eyes do leave a mark on you too.

With an ever increasing trend of fast food around the world and people having less time to dine in, the trend of drive thru is increasing day by day across the globe. The drive thru facility is available at all leading fast food chains in various countries and people make the best use of them, while saving their time and getting the food items easily.

See one of our articles on fast-food here

However there are some pranks that have been observed happening at these drive thru everywhere. Last week I happened to visit a leading fast food chain and being in a hurry myself, I decided not to dine in and get the food items by the drive thru facility. I was in a rush so I hoped this choice of mine would get me the food and save my time which would make it a win-win situation for me. However on reaching the fast food chain I was alarmed to see a huge queue of vehicles and people waiting anxiously to get their food items. I also drove my car into the queue but even after a significant interval of time, felt no advancement in it.

I was in a hurry and with every minute passing by, I was getting late for an important meeting that I had to attend in any case. At this moment of time, I decided to descend from my vehicle and moved forward on foot so I might in some way come to know what’s going on and how long will I have to wait, further. 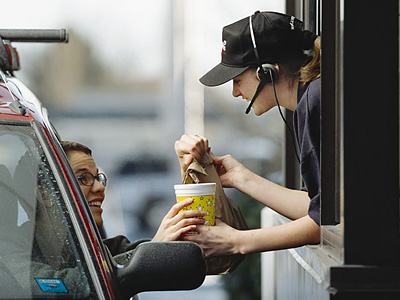 I was kind of stuck in there because several other cars had entered the queue behind me and there was no way that I could come out  from behind. On walking about 30 yards, I was shocked to see a guy who had come out of his vehicle and was having an argument, rather I must say he was having a fight with the serving staff member of the fast food chain.

The reason behind which was later found as the inability of the fast food chain’s serving staff member to provide pizza to the guy. Although several people from the general public tried to convince this very guy that this food chain doesn’t serve pizza, and serves only burgers, fries, drinks and several specific drinks but the guy would not listen to anyone then.

The whole discussion was not much appreciated by me because I was anxious to get out of the drama and reach my destination in time. However, later I realized how crazy this whole incident was and when I narrated this to my colleagues they could not help laughing hysterically.