Kite flying is a passion of so many people in the world, especially of youngsters in towns and cities of our country. Rather allow me to say that many of the times it has been witnessed that the old take a lead over the youth in kite flying. Basically it’s a leisure time activity created to cut boredom and have nice time when nothing else is to be done. However over a period of time, betting has infiltrated this sport also like other sports. Huge amount of money is at stake when the kites are soared higher and higher in the skies, the music is run on high volumes until the kites flying high and high up in the sky look just like small dots. Then suddenly the crowd cheers booooookaaaaaataaaaaaaaaaaa (a local shout of victory) when kite of the opponent is seen falling off the sky, having its string been cut by other person. Many a times boys and even girls celebrate the victory with wild dance. That is how the sports and betting flourish side by side.

The sport of kite flying has also become a livelihood for so many around the country. There you see someone making special paper, another will be seen preparing a kite while someone will be found polishing the string to sharpen its cutting edge as well as strength to bear the wind pressure in higher reaches of the atmosphere. Many accidents also happen due to this festival across the country. You shall continue hearing that a boy chasing a descending kite has been hit by a car, a school going boy fell of the roof and got his arm cut while flying a kite. Someone will tell you that a man has been badly burnt as his kite with metal attached to the string got entangled in high power electric transmission line but no one gets discouraged and stays away from this sport. The situation came to such a state in the country that once the Government banned this sport. It however later had to lift the ban under popular pressure and demand. As the ban had not only disappointed the kite fliers but had also adversely affected livelihood of a large number of people.

This ban was lifted in last days of February and was greeted with a big applause in our college. Our promotional examinations were terminating in first week of March, that was supposed to be mid of spring season. Therefore we all i.e. college boys and girls decided that just after the examination we shall have a kite flying festival in the college. Girls were even more enthusiastic and vibrant than the boys. They suggested that we make a boys’ kite flying team and the other was to consist of our college fellow girls. You know in this age everyone is very active so we started preparing for the festival and the kite flying inter boys and girls competition as well. The boys’ team captain added an interesting clause to the competition rules. The clause was that the winning team captain could place any decent demand on the loser team. It was made mandatory for the loser team to accept winner team’s demand. An interesting festival and competition was arranged. The boys’ team won the match by a very narrow margin as the girls had competed so well. Now you know what the winner team captain demanded? His demand was…..marry that girl of your team with me. The loser team had no choice, but to submit. So the engagement ceremony was held. 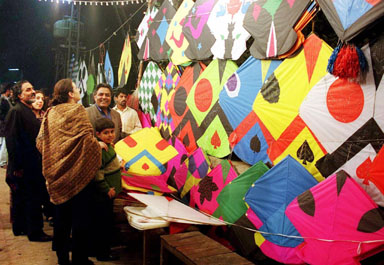 However, later it was revealed that the boy and girl were lovers, wanted to marry. The festival just came as a God given opportunity and they managed to meet their desire. That is how the festival ended on a very happy note.