Global Economic Recession is began to end as US is again ready to bear the global economy on its giant shoulders. As per US President Barack Obama, “Global Recession that hit USA in December 2007 is over”. Obama, while addressing to both houses of Congress Wednesday night, took whole credit for pulling the largest economy of the world out of a deep crisis.

The Federal Reserve issued a survey which reported almost all regions economies as stabilized or improving, except some which are still facing weak markets.

A total of 443k jobs vanished in June in USA while the count was around 247k in the last month. This was the worst recession of America in the last 7 decades or, in other words, since World War II.

In his weekly Radio and Internet Address Saturday, Obama pointed, “We have started putting a stop on recession but the bad may still be coming”. He cited Friday’s Labor Department Report that showed a dip in unemployment. 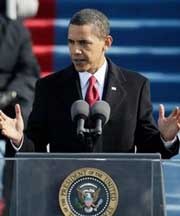 He said that all americans should stand together to face this crisis. Then only the meltdown can be removed and wiped altogether. He said that joint efforts are the only solution and if we will not come together in this crisis, then the day is not far when US will be really in bad situation. He added that It is the duty of every citizen to act as a good citizen and lead United States.

His wordings are adding plus points to all.