No doubt, today Nokia is world’s leading mobile phone maker. We also know that in the field of mobile technology, the competition is increasing day by day.

And if one has to stand in the market, it is necessary for that company to provide the mobile users not only the new technology but also it should be some different and unique from others. You can aslo see my previous post World’s Expensive Mobile Phones.

Some years ago, if one wanted to buy a mobile then the first name that used to come in his mind was Nokia. But now there are many other companies that are acting as a competitor to it. Those big companies are not only providing the best features but also selling the mobiles at very low prices and that too including the same features as that by other brands. For the best cell phones manufacturer, we can point out some big names like Micromax, Karbon, Simoco and many more.

Recently, Nokia also has launched its new Nokia N900 in India. It is the first phone by Nokia running the Linus Maemo Operating System. It is just like a mini computer handset.

What I mean to say that it is a small computer device which can also be used as a phone containing maximum features with a slide out QWERTY keyboard from which one can easily access to Internet and browsing. 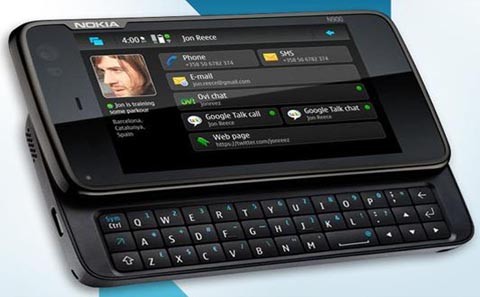 It is available in Black color with volume approximate of 113cc. Its application memory is upto 1GB (256 MB RAM, 768 MB as virtual memory). You can enjoy its full features when u will take it in your hand. In India, the phone Nokia N900 will cost Rs. 30,639 at the end of this month.