The eyes of the world remained fully open with shock when they saw an old man, having age more than 100 years, ran in Hong Kong Marathon. It was really an event at which eyes could not believe. No doubt he made the world record as the world’s oldest Marathon Runner and with that he made a couple of more records as well. He wasn’t less than any young and he covered the huge distance of 10 kilometer in just one hour and 32 minutes. 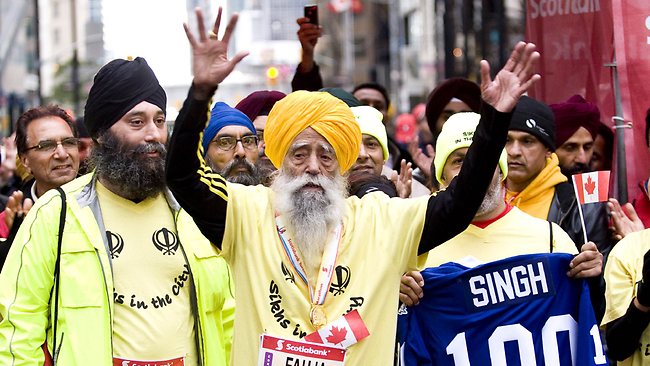 Fauja Singh was actually in India but he lives in UK. When the event of Hong Kong Marathon came, he took part in it with great passion. He was looking like a young man when he came to run. And during the race, all the gazes were at him and he was full of passion with no intention to quit at all. All lips were uttering the words of praise for Fauja Singh who was looking energetic. Even when he finished the race, he said he is still able to run further.

When he was interviewed after race, he said: “I’m very happy and I feel happy when I run as it makes me fresh.” He further said that he may not take part in the next race but if someone will require ask him to run for some charity purpose then he’s ready. That’s called the spirit.

Fauja Singh is a brightly shining example for many. When he crossed the finish line, he had raised more than 13500 British Pounds for Charity. It was a big contribution from any runner ever. And big thing about this old man that he is still ready to run more for charity. He is man never quitting.

It is said about Fauja Singh that he started to run at the age of 89. He felt that running vanish all his worries and brings him out of depression. He was actually very upset due to the death of his wife and son. To come out of the memories he started running. Since then he made his habit to run as long as he can. And then the day of Hong Kong marathon came and he made such a big record. He ran the big distance of 10Km in very less time. It wasn’t the very fast but his run was comparable to an average runner.

For the first time he ran Marathon in 2000 and then in 2003 he made his fastest run and completed the distance in just 5 hours and 40 minutes. When he ran in Marathon in 2011, he made the record of oldest runner in Marathon Race. And now in this Marathon he made a new record of oldest Runner in Any Marathon. Despite these all, he was not successful to get his name written in Guinness Book of World Record as he had not authentic document to prove his real age. Well, he still won the hearts of millions. Hats off Fauja Singh.