Traveling in a united flight turned out to be far too unpleasant for a Baltimore family when their kids had to watch a violent in-flight movie and led to a number of incidents which ended up the pilot diverting the flight and being forced to rethink about their in-flight entertainments.

The episode took place on Feb. 2, when a flight of United, which took off from Denver heading to Baltimore and is just coming to light once the family wrote a letter about their upsetting experience to The Atlantic. 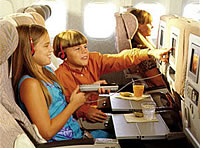 In the letter, the Baltimore father explained that while his wife and he were traveling with their 8 year and 4 year old sons, a movie, “Alex Cross” was shown on drop-down screens above their seats. He points out, that being a PG-13 rated movie as per Internet Movie Base, with the outlines of the plot being, about how a homicide detective who is pushed to the edge of both his physical and moral limits when he gets entangled with a savagely skilled serial killer who has specialized in pain and torture.

Upset and agitated by the first scenes, the passenger said that he asked two of the flight attendants to switch off the monitor that was nearest to his kids and they replied that it since crew members didn’t have the authority to either turn off or change the movie, it couldn’t do it.

The family next requested the Captain to do the needful in the matter but got no response and about an hour later, the pilot informed that they were diverting the flight to Chicago. He wrote that, after the authorities questioned them, the airline booked them into the next flight to the Baltimore Washington International Airport.

In his letter, the passenger also says that the decision of the pilot to divert as abusing power and also writes that if it were a restaurant or cinema they would have just walked out if they found the content too sexual or violent for a 2nd grader or a preschooler but at 30,000 feet, it left them with very little choice.

The airline did not reply to questions on how they decided about the movies for flights and if they were still screening the movie that had upset the family.

A spokesman for Airline Passenger Experience Association said that there were no guidelines that were legally mandated when it came to the movies that airlines showed during flights.