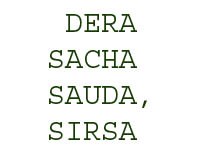 Abdul Mazid, Special Magistrate, CBI, made this decision after accepting the closure report filed by CBI in the court. It was made clear in the Closure Report that some illegal people want to blemish Saint Gurmeet Ji’s image.

SK Garg, the defence lawyer said that all the allegations made against Dear Chief are baseless and he has no hands in this murder. He further added that many senior officials of local police investigated the case. Then the case was handed over to CBI. CBI also confirmed that Dera Chief is innocent and someone is trying to deface him. CBI found nothing against Saint Gurmeet Ji.

Dera’s members are happy on this. As per one dera member, truth can’t be hidden for long. The spokesman Pawan Insan added that some people are trying to deface their Guruji’s image. Those people are enemies of humanity that don’t want peace and love in the country and world. They want to spoil the Dera Sacha Sauda’s and their Guruji’s growing reputation and want to succeed in their bad deeds. He further added that this can’t be possible. They have full faith in the country’s law. Truth is coming in front of everybody. If clouds want to hide the sun and sun-rays by coming in front of it, they can do this just for some time but the sun can’t be hidden for long. Their Guruji is innocent and no one can get success in any type of plot.