It was a weekend of a very hot May, there was a serious electricity breakdown in the town as it’s a routine in this part of South Asia. It was sweltering hot and we three at the home were cursing the electricity authorities and the way the country is being run by a combination of quasi literate bureaucracy and almost illiterate politicians. In the mean time, the Uninterrupted Power Supply device arranged by us to provide some battery power for running the ceiling fans also broke down. Now we all were sweating and anyone having a look on us would have amused to conceive that we had not used towel after taking a shower, such was the state of affairs at home.

Suddenly an imaginative idea flashed my mind. I thought that it would achieve two ends. The idea was to get my chauffeur driven brand new car summoned at home and then drive to a welfare bazaar to get vegetable and fruit for the week. I suggested the same to my wife (who always shoots down any idea in the first go, but later agrees to almost all of them hahaha). Same was the initial fate of this idea too but when I explained the details, she was mightily impressed by the thought that this shall provide her escape from the heat, courtesy of the car’s air conditioner running at my employing company’s cost and will also get her an opportunity to get the fruit etcetera for next week. Thus she started getting ready, the main problem now was to identify a dress which had yet not been seen by ladies and the shopkeepers in the vegetable market. I tried to convince that dress does not matter in a vegetable market but you know no one can convince a lady when it comes to dress selection. Anyhow this dress selection parade came to a close, comparatively early today.

Also see,
Misapprehension At the Cinema

In the meanwhile the car had come. We mounted it and drove to the market well protected from scorching sun by use of sun screens and air conditioner producing a chill effect. The shopping spree went quite well, the market was without many of the customers so the wife was able to pick fruit of choice at lower rates and was happy. Now she desired to go to main market to get a few household items. Thus we went to a densely populated area. There the city authorities were seen unwisely dividing a narrow and already over utilised road in two parts by creating a meridian in the mid of the road.

It was causing serious traffic jam. Additionally a car parked in the middle of the road was causing great difficulty to the motorists by squeezing the already squeezed place. I dismounted from my car and moved on to request that car’s driver to park on a side to let others drive. In the car I found a ferocious old man at the driving seat, not in the mood of listening and already in heated debate with few other drivers who were at a loss to do anything ugly due to age of the fellow. 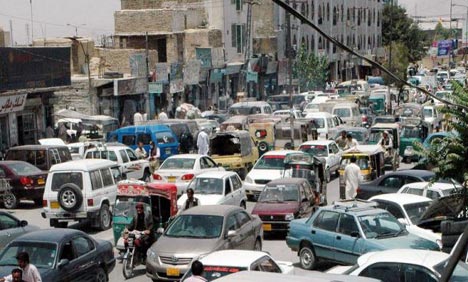 Sensing the old man’s rage and psychology of the old people I rushed to a cold drink shop right opposite the old man’s car and brought a chilled bottle of soda for him. Seeing the drink the oldie smiled broadly and said wait son, let me get my car to a side and then I shall drink it in comfort.

In the meanwhile the old man cleared his car off the road and looking at me triumphantly said “look, how I controlled the traffic but HOW THIS COLD SODA CONTROLLED EVEN ME.