How about you are making toasts in the kitchen and listening to music simultaneously without any additional device like mobile, tape-recorder or a walkman. And it is possible now. Breville VTT296 2-slice Radio Toster has a radio loaded in it. Now people can listen to their favorite breakfast show, while they are making breakfast. So should rather classify this in a strange category of 2-in-1 toaster. The toasts are heated in music or music to your toasts too. Amazingly funny and vice a versa. The parent company is into the business of making kitchen appliances since last 79 years.

Design
The toaster part has two slots for toasting both thin and thick breads. De-frost blue illuminated control buttons for toasting, reheat and mid-cycle cancel. It also has an auxiliary input to connect mp3 digital music players, such as an iPod.

The parent company is based in Australia and has sold more than four lakh units and had made its name in international markets. 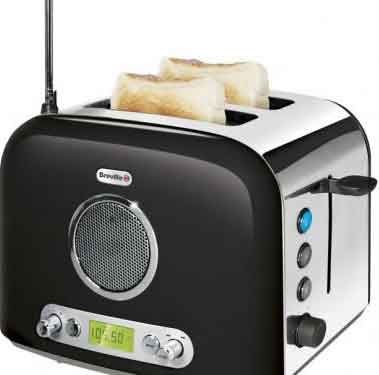 After this a number of companies tried experiments with different home appliances. During this time Electrolux tried making Scan Toaster. This toaster was actually a computer printer / heater that allow you to print a customized pattern on your toast. And in this series in the year 2001 Brunel University created a magical toaster that actually printed a graph of weather prediction, which was perhaps limited to sunny or clowdy on a piece of bread.