A little girl who lives in Aylesbury, Buckinghamshire, England is suffering from a disease in which she is unable to eat properly. Her mother feeds her by the stomach tube. She is suffering from a serious disease known as eosinophilic gastrointestinal.

Though Ella Campbell is just 5 years old and has a strange disease but she keeps a strong heart. She is very brave and takes her lunch-box with her to the school so that she may fit well within her circle of friends.

The disease from which Ella is suffering doesn’t allow her to eat from mouth directly. As when she eats from mouth, she gets a lot of pain and starts vomiting. So most of the time, her mother Karen Campbell feeds her from a tube.

Inspite of so much pain that she gets from direct-eating, she happily takes her lunchbox with her while going to the school. She feels very discomfort in eating during lunch hours but then also always keep smiling. 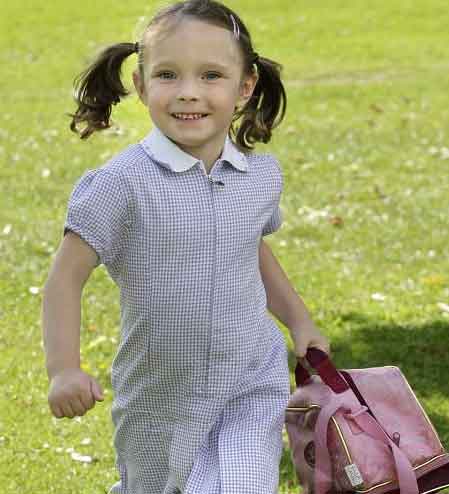 Karen Campbell says that she tries her best to prepare special biscuits for her daughter so that Ella can eat easily and live happily all the time.

Ella is taken to hospital almost frequently and due to which, her attendance in the class also remains less in every month.

Inspite of all the pains and odds, the little girl loves to study, to go to school and enjoy with her friends.

After many tests, the doctors were able to point the strange disease and came to know that why Ella reacts badly to the food.

We hope that the little girl Ms. Campbell from United Kingdom get well soon.