Wang Tianging once got a bullet in his head. Actually, once when he was going to his home in 1988, some hard thing hit his head. He though that it was a slingshot. He went to hospital and took some medicines from there.

Since that day, he suffered some illness and later chronic epilepsy but no one realized that it’s the bullet in the brain that is causing all this.

It was only when he reached a hospital in Zhangjiakou city, Hebei Province, in order to get rid of his chronic epilepsy. The doctors did his Brain-Scanning and were surprised to see that a rusted metal was lying in his brain. Further examining, they saw that it was a bullet that was sitting there from last 23 years. The bullet also got rusted n this huge interval of time.

Then he told doctors that the pain is from the last 23 years, which none of the doctors at that time realized.

Wang Tianging is a local farmer in China, living in the central part of the country. 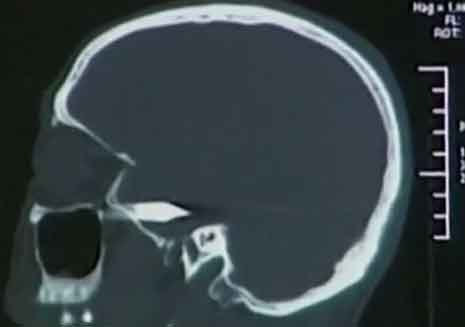 The doctors said that he is a very lucky person and has cheated the death from just a few millimeters. Had the bullet gone a little further, there were no chances to be safe. The bullet had not damaged any arteries but caused the epilepsy.

See the video below of Tianging in the hospital when doctors came to know about rusted bullet in his head.