Huang Guofu is a painter by profession and on the basis of his painting, he has become the Vice-Curator of Chongqing Talents Museum. But the surprise is that he doesn’t have any hands to paint. Then how he paints? With his legs and teeth.

The 41 year old living in China lost his hands in an electric shock incident when he was a child of age 4. Since childhood, he was fond of painting and so he decided to carry on his dream.

At 12 years of age, he started painting to fulfill his dream. He began started painting with his feet. He faced many difficulties at the initial stages. He was not even financially rich. And to this, he had to leave his studies at age of 18 because his father was ill and he needed the money for his treatment.

Huang then decided to make painting as his profession and earn money through it. He started making pictures, sat on the nearby streets and sold them to the passengers near-by. People started liking the beautiful art. Some even purchased in order to help him with some money. Some people bought some cheap pictures in order to express sympathy.

But slowly, his art showed professionalism. He got quality in his work. People started recognizing the photos. He began saving some money.

Mr. Guofu then thought of expanding the business. He started traveling to the nearby areas of his home town. There also people started liking the paintings. 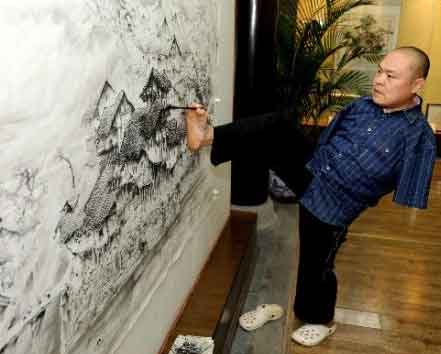 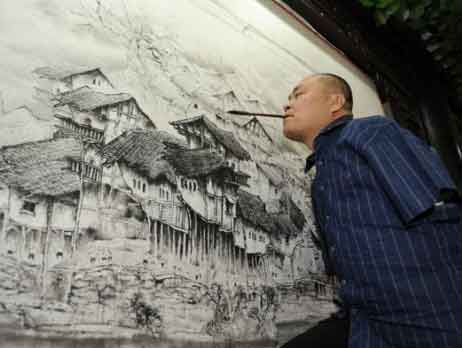 Some people commented that the painting with just legs can’t be so rich in quality as that can be with hands. This didn’t demotivated the armless painter Huang but he thought of using his mouth as well.

He put the Paint-Brush in his mouth and started his work. Now, he saw more elegancy in the work. He felt happy that the negative comments made him more popular.

During one of the travels when he traveled to a city in China’s Sichuan Province, he met Hu Guoui. When Hu Guoui saw him and learned about his successfully journey full of struggles, she was very much impressed with the real story and felt in love with her.

She expressed her love in front of him and proposed the painter.

Huang Guofu was very surprised but happy. Both of them married in the year 2000 and since that day, her wife works like her assistant and helps her husband in every way. She carries the painting tools and paintings. Her husband also feels bit relaxed from his wife helping him.

Huang was even invited by the expo committee to present his skills in front of all during the 2010 Shanghai World Expo.

And now, Mr. Huang Guofu is been named as the Vice Curator of the newly established Chongqing Talents Museum. Since then, many handless painters have joined this museum.

The successful painter says that he is very happy in life and thankful to GOD of what he has given him. He has no complaints from anyone and says that no obstacles can stop a human being from achieving his target, if he has a strong will.

via Orange and CNTV