An alien has found dead in Siberia. The dead body, found in badly damaged condition, was lying on the snow, with its mouth little opened.

I don’t know if the body is really of an alien but the youtube video showing the dead body is becoming very popular. The original video that was uploaded on 17 April has already crossed 100,000 views.

Irkutsk in Siberia of Russia is a well-known UFO hotspot. Their believers think that the aliens when visited Earth met with an accident and left their friends body on our planet. The body might have been missed by government of Russia.

Every year, dozens of UFO sightings are there in Irkutsk but it was the last month, in which this unknown and unidentified object is reported.

One of the persons said that at first sight, we were not able to believe that we are looking at the body of an alien. And also there were no signs of space near it. But at last, we had to believe that it’s not an earth-human body.

While other persons still believe that it’s just an art piece and someone has crafted this piece and its not real body. 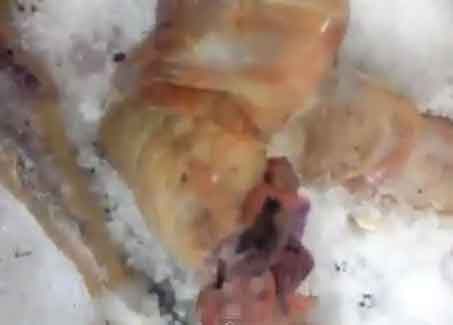 I don’t know if it’s fake and someone’s mischief or True Dead body of alien. But if it’s true, scientists would find it useful and so our science.

What you all think –> Is it Real Alien?

UPDATE: The alien body is not of actual alien. It’s a fake body and just a hoax