Bollywood Actor Salman Khan, who has recently given hits like Dabang and Ready, has now turned into producer with the movie ‘Chillar Party’. Salman is one of the co-producers of this film. First, the senior star saw the film and only then made his mind to produce it. It is somewhat drawing the output of his charity ‘Being Human’ and so he decided that he should be a part of it and should not miss any chance of working in it.

It is clear that Salman has worked very hard. The theme is very clear and resembles very well to the theme of Mr. Khan’s charity ‘Being Human’. Along with Salman, Ronnie Screwvala has helped in the co-production. 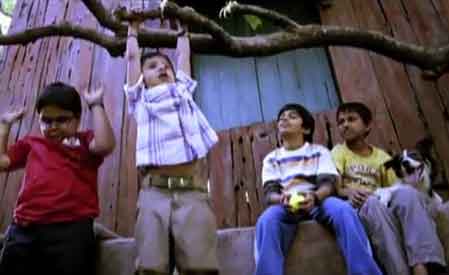 The story is of some cute, naughty and innocent kids whose life takes a turn when another child with his dog enters in their life. The neighbors want to turn the two newcomers out of the locality but all the children are in opposition of this.

The team and gang of all the children; second-hand, panauti, encyclopedia, akram, jhangiya, aflatoon, silencer and shaolin live in a locality of Chandar Nagar. All of them study in the same school. The gang collectively is termed as ‘Chillar Party’. The name also implies that it might be a team of poor and roaming-type characters and the same holds true also.

One day another child named Fatka came into that area and he gets the job of cleaning the cars. He has his pet dog Bheedu with him. At their arrival, the kids’ gang gets angry and don’t want them to stay in their colony. After some bitterness, the gang welcomes the 2 new strangers and soon all of them become friends. The team size then increases by 2 (one boy and one dog).

But the bad is that the neighbors do not want that the Bheedu dog should live in that colony. The reason is that they are facing the political pressure from the corrupt politician. So, they decide to throw the dog out but the kids love that animal and they try their best to overcome the pressure. They decide that they will not allow the pet dog to go out and assure their friend fatka that he need not to worry anything. The story is all about this.

The bollywood movie is of small children. So, the minors would love it. Also, since the film leaves a nice message and is a clean one, it can be watched with the complete family. It shows that humans should leave their selfishness and should help, work and think of others too. It is directed and made with lots of heart-touching instances, feelings and emotions.

The jokes and mischiefs of little actors will make you all laugh. One of the boys, Jhangiya always talks about Gandhiji and explains every his wording in the tapori style. Even in the class in front of the teachers, he talks the same way with his gandhi style. He is very funny and you will love his wordings.

The movie is funny and full of humor. The first half is more interesting than the second one.

The acting done by all the boys is superb. They have even outshined the stars-boys. Again, Jhangiya will be the main attraction point for you.

You will be forced to clap and laugh at many of the instances.

The dialogues look very refreshing and natural. The cinematography is also good. The music by Amit Trivedi explains the bollywood movie well.

Naman Jain gives some of the best dialogues. Irrfan looks very natural. His acting is superb. Chandranshuh will make you laugh. The dog Bheedu has also done his role well :).After all; it is this dog around which the story is revolving.

Ranbir Kapoor comes in the end to play his item number which he has performed well.

If you are a family man, you should go out and see this with your entire family to give your family a laugh and have good timepass.