Bollywood stunning actress Celina Jaitley disclosed just 2-3 days before that she is married to her long time boyfriend Peter Haag. She said that both of them were married each other some time back in July. This statement of the actress that she floated on Twitter caught everybody’s attention and created a buzz everywhere.

She tweeted that both of them exchanged rings on 23 July. She also felt sorry about late announcement of this good news and excused of some family problems due to which they had to hide this news. She also shared one of her photos with her husband who showed the actress, Peter, her brother-in-law and her father-in-law.

Peter Hagg is basically from Australia and owns a hotel in Dubai.

This wedding news was indigestible for her fans and today all are hearing one more news that is even more unbelievable than this one. Don’t know if it’s true or not. Actually, rumors are that Celina is pregnant. Within just one month of wedding, Mrs. Jaitley is reported as pregnant Celina. So, it’s little difficult to digest for her fans.

Don’t know whether Celina pregnancy news is true or not but the actress is seen talking of becoming mother and is expressing her desire to become mother soon. 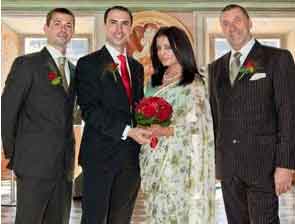 Bollywood diva is seen doing the preparations of new arriving baby and buying the child stuff like baby dolls etc. Though all these preparations and shopping don’t reveal that she is going to give birth to a baby but it is evident that soon a child is coming in the diva’s family.

But the pregnancy can be true also as the wedding was also a surprise for everyone and at first instance, something that can’t be believed. But later all realized that their girl is now Mrs. Celina. So, it can be that now their girl becomes Mother Celina.

However, if all is true then we have to see whether she would be saying No to movies or not.